Every month, we post an annotated bibliography of books that were rated ‘Outstanding’ and nominated for our Distinguished List at our previous month’s meeting. Members can see full reviews of these books and many more in the September edition of BayViews. Sorry for the late posts everyone!

When the first apple falls from the tree, Faith knows Uncle Arthur will be visiting soon. But will he still come, now that Great Aunt Lucy is gone? A story of remembrance, loss, and family ties unfolds through gentle verse and simple prose. Kinetic text is enhanced through detailed pencil drawings that convey movement through energetic strokes and sketched features. (2-7)

This is a book about a girl growing up in a contemporary Navajo Nation. She has a foot in two worlds: her traditional Navajo world and modern America world. The information in the book, including the use of the Navajo language, makes this an interesting and engaging read. (5-8)

Some Kind of Courage written by Gemeinhart, Dan; Scholastic Press 2016

In 1890, Joseph Johnson – no stranger to loss after the deaths of his entire family – finds that his beloved horse, Sarah, has been sold without his consent. So begins Joseph’s epic and unceasing quest to get her back in this dynamic survival story narrated by an endearing and complex protagonist. (4-7)

Belief in the power of wishes has carried eleven year old Charlie a great distance, but will it be enough as she toughs it out miles away from the only family she’s known? A strong choice for developing empathy in young readers who may see the world as being very black and white as Charlie’s dog softens the hard exterior developed through an undependable home life. (3-6)

These 21 concrete rhyming poems rely only on the typeface for illustration – there is no other accompanying artwork. Instead, Raczka arranges the letters of the poem’s title to create an interesting image, followed by the poem’s words set down in unusual shapes to reflect the topic. (2-7)

Bridge to the Wild: Behind the Scenes at the Zoo written by O’ Connell, Caitlin; HMH Books for Young Readers 2016

Experience the zoo like never before with Caitlin O’Connell’s Bridge to the Wild. This narrative nonfiction is sure to take children and adults on a behind-the-scenes adventure of a lifetime! (3-8)

Rockwell’s well-pitched 2nd-5th grade historical account of James, an enslaved man during the American Revolution and his work as a double agent, is expanded upon with Cooper’s sensational and atmospheric illustrations. The artwork reads well from a distance, succinct text with a great narrative hook–a heretofore unknown hero–makes for an excellent read aloud. (3-6)

Can I Tell You A Secret? written Kang, Anna and illustrated by Weyant, Christopher; Harper Collins 2016

Monty is a little frog with a big secret that he’s ready to share. Monty learns to face his fears because he has the help and support of a good friend. (PS-2) 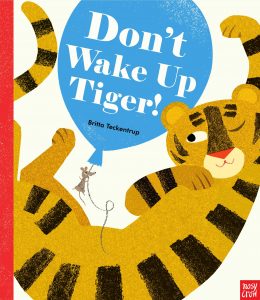 Don’t Wake Up the Tiger written and illustrated by Teckentrup, Britta; Nosy Crow 2016

Five animal friends try to get past a sleeping tiger, and readers are asked to help them along by petting and singing to the tiger to keep him asleep! Illustrations are colorful and bold in this outstanding picture book. (PS-2)

When unlucky, redhead Frank’s parents take him to the pound to find a pet dog, rescued mutt Lucky enters Frank’s life and the two explore the world together. This inventive title, which blurs the line between fiction and nonfiction, should lead readers to a curiosity of the world around them. (K-2)

Poppy Pickle: A Little Girl with a Big Imagination written and illustrated by Yarlet, Emma; Templar 2016

Poppy Pickle lives in an ordinary house, with ordinary parents and an ordinary cat, but she is far from ordinary. She is ready to burst with imagination, which can sometimes get her in a pickle. Children and adults of all ages will be mesmerized by this silly, inventive and incredibly detailed story. (PS-2)

There’s A Bear On My Chair written and illustrated by Collins, Ross; Nosy Crow 2016

We do not make a happy pair, a mouse and a bear with just one chair. How will mouse ever get bear out of his chair? Driven to despair, mouse heads elsewhere. (PS-K)