Autumn is the time for our semi-annual Board Book Round-up!  There have been many titles published since last March, so I will split this column into two segments – look for the second half of the round-up next week: 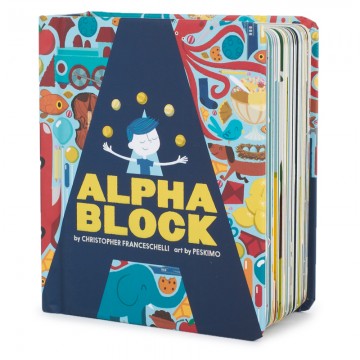 An alphabet book and guessing game in one, this is a perfect board book for toddlers. A die-cut page features the letter, with space for the reader to peak through at part of the illustration on the next page. Guess what A stands for, while looking at something that is red with a stem – is it an apple? Even young children can guess most of the items – balloons, cookies, and various animals, household items, and things in nature. Only “Y is for Yacht” seems out of the ordinary. At first glance, adults may feel that the item for each letter is too familiar – these are things seen in many other alphabet books. But the idea is for very young children to guess the item, so choosing a more exotic item would defeat the purpose. The die cut alphabet pages will help kinesthetic learners – they can feel the shape of the letter. The full color illustrations have a 1950’s graphic quality that is distinctive, and clearly shows the items pictured. The only negative aspect is the small typeface used for the word for the item; using a slightly larger typeface would have made this easier for emergent readers to use.

In this over-sized board book, various famous modern artworks are shown because “faces are the most important things that a baby and a young child sees.” Each painting is labeled with the title and artist’s name, and the first page of the book has a listing of the artists with a brief description. Paintings by Picasso, Klee, Close, and Guangyi are included; the final page is a mylar mirror for the baby to see his own face. This seems more suitable for parents, or a museum gift shop, than for a baby to enjoy as many of the faces depicted are abstract. If your library has Peel’s first book, Art for Baby (2009), this may be popular, although it is pricey.

Originally published in the UK in 2011, this graphically illustrated book features just one word per spread – the name of the farm animal depicted in the artwork. The full color art resembles wall paper on one side, with the animal replicated in a pattern, facing a large block print of the animal. This is a fine example of the text and artwork combining for the ype of book a baby really can enjoy, due to its simplicity of concept and excellent execution of the concept. The back cover indicates the artwork was accomplished with cut-and-relief lino prints.

Similar to McPhail’s Ben Loves Bear (2012), this lovely board book could also serve as an easy reader. Alternating between a little girl and her rabbit, the text describes their activities from morning until bedtime. The soft watercolor and pencil illustrations depict a realistic toddler, with just one short sentence per page. This is sweet but not cloying. Is the bunny a stuffed animal, or real?

This companion to Braun’s Peekaboo Baby (2012) also contains flaps (similar to those in Eric Hill’s “Spot” books), which lift to reveal an answer to the title question. Originally published in the UK in 2011, the cartoon illustrations are done in bright colors, with round headed bald babies of various skin tones. The text consists of a question on each spread asking who is hiding, with the one word answer under the flap. The animal hiding is also shown, so this works for babies, toddlers, and even emergent readers. Useful for baby storytimes as well as parents to use one on one.

More for the parent than the baby, this is still a great deal of fun. Various animals are shown performing, with a weasel dressed like Michael Jackson, frogs on bongos, and a “rockabilly goat,” ending with a baby playing an electric guitar. The rhyming text is brief and funny, and the deeply saturated bright color cartoon illustrations exhibit most of the humor. Buy if you have hipster parents.

Board Books Adapted from Picture Books:

Adapted from The Jellybeans and the Big Dance (2008), this is a little long for a board book. Four friends help each other in dance class to successfully perform in the dance recital. The narrative is more for an older preschooler who can relate to the story and listen to the prose, and the humorous watercolor and pencil artwork contains small details that babies and toddlers won’t be able to make out. Stick with the picture book edition.

Two stuffed animals (an elephant and mouse) sail off in a boat made of newspaper in this imaginative story better suited to preschoolers than to babies and toddlers. The situation of the plot requires the listener to understand the emotions of friends who are separated, and the threat that one friend is lost at sea may be something toddlers can’t grasp. The text is too long for a board book, with a paragraph per page. The delicate watercolor, ink, and collage illustrations are beautiful but may have too many small details to be seen adequately in this smaller size.  Due to the artwork and the quiet, emotional story, this is better served by the picture book edition.

At 32 pages, this is not abridged in any way, just in a smaller size than the original picture book. A small fox wants to play with her new wagon but first must go to the store for Mother.  Along the way she runs into several friends who hop on the wagon.  The full color soft focus illustrations show the imaginative play of the friends, which the text doesn’t indicate, giving this a wry humor. Toddlers will certainly relate to the play, so this works well for one on one, but the original is better for storytime.

Three toddlers play together in this imaginative rhyming story that features a tribute to Sendak’s Where the Wild Things Are. The text has a nursery rhyme quality perfect for babies and toddlers, but he lovely illustrations have too many details for the board book format. The pictures alternate between full color art and small ink and cross-hatched sketches which are easier to see in the picture book version.