Here are some more board book mini-reviews for Fall 2013:

These board books with “moveable parts” (as it says on the front cover) don’t have a series title, but each has the same cast of characters of mice in hard hats. Dig In! shows the mice constructing something, which we find out at the end is a pizza! In Dive In!, they appear to be working in a shipyard but we discover it is a bubble bath. The full color, blocky style of graphic artwork is quite pleasing and should be easy for babies and toddlers to view; the rhyming text is also a success. There are areas that slide and pull, but these are quite sturdy, so this should hold up to library circulation.  But the story and artwork would be a hit even without these tactile elements. 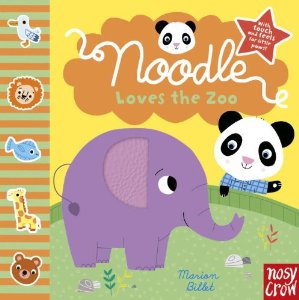 Sixth and seventh in the series of simple stories featuring a panda, Noodle and his parent see various animals at the zoo, and things at the park.  The rhyming text has a good amount of repetition, so this could even serve as a very easy reader. The board binding, brief text, and full color cartoon style illustrations all work for the baby or toddler audience. There are also some tactile embellishments, such as cloth or foil embedded into the illustration for the child to touch.  These include brown velveteen for the bear, and a mylar “ponds” next to the lions at the zoo, and in the park.

Part of Kar-Ben’s series of “Very First Board Books” created to “introduce young children to Jewish life,” this Hanukkah-themed book will likely appeal to a wide audience. Many preschools talk about Hanukkah, and this book can help non-Jewish children learn about the holiday, too. The concept of eight nights, eight gifts, and eight candles is described, but not the original event concerning the Maccabees, so the adult sharing this will need to fill in some details. The simple rhyming text and color cartoon illustrations will appeal to very young children.

A brief rhyming text is directed at the baby listener in this charming new board book series. The clipped rhymes encourage behavior related to the title theme – moving and climbing, reaching and stretching, cuddling and kissing, and eating and drinking. The illustrations are also quite pleasant, alternating between  b&w photographs of different babies, and pages with a colorful cartoon of a baby.  The babies represent a wide array of ethnic groups. These will be great to hand out to parents attending a baby storytime, or for library circulation. Each book concludes with a brief list of tips for parents and caregivers on interacting with babies, to encourage bonding and intellectual stimulation. This reviewer only saw Cuddle and Move; Eat and Reach were not available for review. Review based on the digital versions from Netgalley. 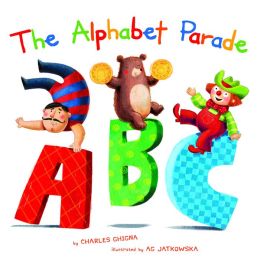 Four board books use common concepts as the theme for this series. The rhyming text is jaunty, but a little long for the board book audience: “M is for the Monkey, who marches with her toys. N is for the Nightingale who makes a lot of noise!” Most of the alphabet subjects are animals, which makes this better for emergent readers rather than babies; toddlers will enjoy this series, too. The color cartoon illustrations are a big part of the success, conveying a joy and energy. This reviewer only saw Alphabet Parade, the others were not available for review. Review based on the digital versions from Netgalley.

Using the popular characters seen in the 1939 film version of “The Wizard of Oz,” this series is not entirely successful.  The serviceable rhyming text describes the world of Oz and the colors: “A rainbow horse, it changes its hue. Purple now but soon something new!”  Unfortunately, the Cowardly Lion is used as the example of orange, when his fur is clearly a mustard yellow. Other film references include ruby slippers, when the original books had them as silver. The full color cartoon illustrations resemble 1950’s style animated cartoons – stills from the film would have been a better choice. The book includes an index, glossary, and a list of suggested books and websites, which isn’t really useful to the toddler audience. Skip this series in favor of the “My Little School House” concept books reviewed above. This reviewer only saw Wizard of Oz Colors, the others were not available for review. Review based on the digital versions from Netgalley.