This month will continue a series of short reviews of new board books, begun in the March 2018 BayNews. For this month’s column, we will focus on board books that are adaptations of picture books, and series that contain flaps.

New Board Editions of Picture Books

Anderson, Derek. Ten Pigs: An Epic Bath Adventure. Scholastic, 2017. [32p.] $6.99. 978-1-338-13581-7.      The original picture book edition, published in 2015, is best for storytime, but this board version is fine for libraries to offer parents. The brief, jaunty rhyme and counting elements make this a great read-aloud, and the hilarious story of ten pigs trying to fit into one bathtub has plenty of toddler appeal. The colored cartoon artwork is not diminished in this smaller version.

warning the reader about the crocodile inside the book includes die-cut holes on the final two pages, which works well in the board edition. The original 2013 picture book is preferable for storytimes but this is great for one-on-one sharing; even emergent readers enjoy this book. 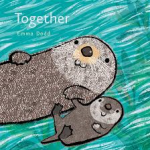 Dodd, Emma. Together. Nosy Crow, 2018. [22p.] $9.99. 978-0-7636-9940-6.      When these were originally published as picture books, I thought “these would be better as board books.” The very simple stories and the smaller square size seemed best suited to parent and baby, and these board editions validate that thought. Just slightly smaller than the originals, but with board pages and padded covers, these are perfect for babies and toddlers. Each depicts an animal parent and child – Always features elephants, Love shows rabbits, and Together stars otters. Each contains a rhyming text where the parent tells the baby how much it is loved, and the full color artwork depicts the animals in a charming and relatively realistic way. A great book for one-on-one sharing, a baby storytime, or a baby shower gift. 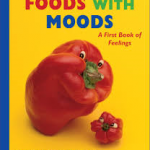 How Are You Peeling? Foods with Moods, this features the same cover photo of a red bell pepper with eyes. The rhyming text is different, talking about different emotions, paired with the popular photos of various fruits and vegetables with eyes. Both the original and this board edition are great for helping toddlers identify their feelings, although the picture book version is best for storytimes.

Lloyd-Jones, Sally. Skip to the Loo!  A Potty Book. Illus. by Anita Jeram. Candlewick, 2018.  [28p.] $8.99. 978-0-7636-9977-2.      Everyone in the forest needs to visit their potties, and even though most American children don’t know the slang “loo” for the toilet, this is still a fun story to encourage potty-training. This rhyming tale was originally published as a picture book in 2016, which is the preferred edition as this “shrinks” the illustrations so much readers may miss details.

book from 2015, best friends (a chick and a duck) play inside, and then outside, on a rainy day. The rhyming text and charming color cartoon-like artwork work well together in a story many toddlers will relate to. The picture book edition is preferred but this board edition works for one-on-one sharing.

Tyger, Rory. I Love You, Grandma. Tiger Tales, 2017. [28p.] $7.99. 978-1-68010-524-7.      In rhyming couplets, a bear cub describes all the things Grandma is good at, from singing songs to cooking favorite foods, to hugs and kisses. The sweet story is illustrated in soft colors, using artwork that originally appeared in a different book Good Night, Sleep Tight by Claire Freedman (2003). The repurposed illustrations work well here, in a book best used for one-on-one sharing. 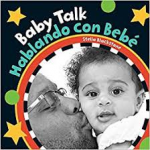 Blackstone, Stella. Baby Talk – Hablando con Bebè. Translation by Maria Perez. Barefoot Books, 2017. [14p.] $5.99. 978-1-78285-350-3.      With Spanish and English, this bilingual version of the 2015 board book features b&w photos of parent and child representing diverse ethnicities. The charming photos and the repeated phrase “I talk to you and you talk to me” would work well in a small baby storytime. This would also be a great choice for a parenting class on the Five Parent Practices, which includes talking to a baby, or as a giveaway for Reach Out and Read and other literacy programs. A must purchase for libraries serving families who speak Spanish.

version with Spanish is a great choice for libraries. A toddler describes activities the family does, including a visit to a park and grocery store. The family is depicted with brown skin and black curly hair, and includes an infant as well as the toddler narrator and parents – the father is very active in helping the children. 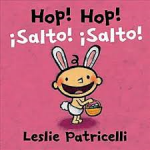 Patricelli, Leslie. Hop! Hop! Salto! Salto! Translation by Georgina Lazaro. Candlewick, 2018. [26p.]  $6.99. 978-0-7636-9525-5.      Patricelli’s signature diaper-clad bald baby with one springy hair stars in this story about waiting for the Easter Bunny.  The story describes common activities like coloring eggs and searching for them, and covers the concept of color names and mixing primary colors to get secondary colors. The original from 2015 was in English; here it is in English and Spanish. Because of the color concept aspect of the story, this would be a fun and useful read at any time of year.

New Board Series with Flaps

Arrhenius, Ingela P. Where’s the Zebra? Nosy Crow, 2018. [10p.] $8.99. 978-0-7636-9914-7.      In this simple series, animals are hidden behind flaps made of felt fabric, which will be easy for a baby to lift. The full color artwork and very simple text are also suitable for babies, who will feel accomplishment at finding the hidden animal. Each final spread has a mylar mirror for the reader to find oneself. Best for one-on-one sharing; this series may wear out quickly in a library setting.

Braun, Sebastien. Can You Say It, Too? Stomp! Stomp! Nosy Crow, 2018.  [10p.] $8.99. 978-0-7636-9934-5.      Five dinosaurs are featured in this board book with large flaps, and the accurate names are given such as stegosaurus and triceratops. Sound words are also included, from roars to the title “stomp.” A winner with toddlers and preschoolers, this may not hold up to library circulation but will certainly be popular.

Cousins, Lucy. Where Is Little Fish? Candlewick, 2018. [22p.] $7.99. 978-0-7636-9486-9.      Artwork from some of Cousins’ fish-themed picture books has been repurposed for this series titled “A Little Fish Book.” The counting story does not contain flaps, but the artwork has shiny, laminated paint that will engage babies and toddlers. Both the numeral and word for each number, one to ten, are included, and the fish in each spread are easy to count. The rhyming text, clear artwork, and counting element make this great for a storytime. In Where Is Little Fish? readers are urged to lift the large flap in each spread to find the title character, who is under the final flap. The flaps are sturdy, and the deeply saturated artwork will engage storytime listeners if the audience is not too large. Sure to be popular and will circulate well in most libraries. Jarret, Elodie. Birds of a Color. Candlewick, 2018.  [20p.] $12.  978-1-5362-0063-8.       Originally published in France in 2016, these two board books with flaps are clever and original, and should appeal to a wide age range. Contrary Dogs demonstrates the concept of opposites, with foldouts to show a short and long dog, a dog above and below a table, and more. Birds of Color shows black and white birds, who display colors when the reader lifts the flap that is a wing or a beak. The author/illustrator goes by the nickname “elo” on the cover. These are a little fragile but will certainly be popular.

Free Webinar on Tues. May 29 on Racial Equity in Schools »
« ACL Meeting on Friday, May 11 at Oakland Main