Board Adaptations of Picture Books

Usually the original picture book editions are preferred over the board book editions. Here are some new board editions you may want to consider:

Antony, Steve. Please, Mr. Panda. Scholastic/Cartwheel, 2015/17. [26p.]. $6.99. 978-1-338-10648-0.     A large panda offers donuts to various black and white animals (skunk, penguin, orca, etc.) but only the meerkat gets a donut because he says “please.” The droll full- color cartoon illustrations keep this from being didactic; older toddlers will guess what is wrong with each animals’ demand for a donut before they reach the end of the story. Fun for a wide age range.

Boudreau, Helène. I Dare You Not to Yawn. Illus. by Serge Bloch. Candlewick, 2013/17. [28p.]. $8.99. 978-0-7636-9307-7.      A boy is instructed to avoid yawning, because that leads to bedtime! Although this is a delightful story with charming cartoon illustrations, the text is a little too long for the board format. Stick with the picture book edition, and use at a bedtime storytime where the audience will yawn along with the protagonist.

978-0-7636-8661-1.      Papa rabbit plays with his little one and puts him to bed in this somewhat sentimental rhyming story. The watercolor illustrations feature forest animals and setting, and will please fans of McBratney’s Guess How Much I Love You. This oversized board book works just as well as the picture book edition.

Clanton, Ben. Rex Wrecks It! Candlewick, 2014/17. [32p.]. $7.99. 978-0-9308-4.      Three friends (a robot, bunny, and monster) play together but Rex the dinosaur wrecks their block structures. The title is repeated in several places, which makes for great audience participation at storytime, but the small size doesn’t work with groups. For home use only.

Duddie, Jonny. Gigantosaurus. Templar, 2014/17. [32p.]. $8.99. 978-0-7636-9294-0.      With a paragraph of  rhyming text in small print on each page, this does not work in the board edition. Four small dinosaurs are warned by their mothers to watch out for the Gigantosaurus, in this tale with a message similar to “The Boy Who Cried Wolf.” With realistic dinosaurs and detailed illustrations, the story and artwork are far better suited to the picture book edition.

Lambert, Jonny. Special You. Tiger Tales, 2016. [22p.]. $9.99. 978-1-58925-238-7.      Originally published as a picture book entitled Little Why, this board edition has padded covers. The story involves a baby elephant named Little Why, who wants horns and other physical attributes he sees in other animals. The text has repetition which would involve an audience at storytime, but stick with the picture book version.

Rinker, Sherri Duskey. Goodnight, Goodnight, Construction Site. Illus. by Tom Lichtenheld. Chronicle, 2011/17. $7.99. 978-1-4521-1173-5.      Although the text is unabridged, this small board version is probably best just for home use and not for libraries. In this celebration of construction machinery, the rhyming text and vehicles with eyes and mouths have child appeal. However, with four lines of text or more per page, the small size of the board edition is not as effective as the original picture book.

978-1-941026-70-0.Weill, Cynthia. Colores de la Vida: Mexican Folk Art Colors in English and Spanish. Cinco Puntos Press, 2010/17. [30p.]. $9.95. 978-1-941026-67-0.      In these two bilingual board books, the vivid artwork is what stands out, and the board editions are a good size so these would be fine for libraries. In Colores de la Vida, the text is just the English and Spanish words for the color: “Yellow Amarillo” which is set opposite a photo of a folk art animal sculpture. These creations are done in a variety of media, including carved wood, clay, papier mache, and metals. In Count Me In, the bilingual text has sentences in English and Spanish, as well as the word for the numbers, but no numerals. The illustrations are color photographs of hand-made dolls, set against colorful backgrounds. Great for baby storytimes and one on one sharing.

Board Books with Sensory Features

Anon. Time for Bed. Illus. by Thierry Bedouet. Twirl/Chronicle, 2017. [12p.]. $12.99. 978-2-74598-177-6.     With a book design similar to Donald Crew’s innovative Inside Freight Train (Harper, 2001), this features heavy sliding doors on the right side of each spread. Various animals tuck their children into bed, reassuring them that nothing will harm them during the night. The text has quite a bit of repetition to engage listeners, and the animals in clothing and sleeping in beds is relatable for toddlers who might be afraid of the dark. Due to the story and well-crafted sliding elements of the book design, this is recommended for all libraries and for baby storytime. Originally published in France in 2014. 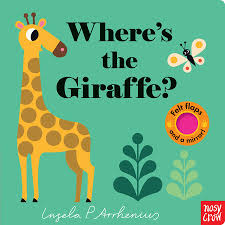 978-0-7636-9335-0.      Brightly colored felt is used for the flaps instead of cardstock paper, making these board books sturdier than many other books with flaps. In each, the reader is asked “Where’s the [animal]?” Lift the piece of felt and the animal is easily seen. The repetition of the text and the ease in the guessing game element make this perfect for baby and toddler storytime. The deeply saturated bright colors of the graphic illustrations will help these carry in group settings, too. Each book’s final spread asks “Where are you?” and reveals a mylar mirror.

Litton, Jonathan. Noisy Noisy Digger. Illus. by Fhiona Galloway. Tiger Tales, 2017. [10p.]. $12.99. 978-1-58925-242-4.      A yellow steam shovel meets another vehicle and asks “what do you do?” Each responds when a flap opens to reveal another illustration of them at work, and a machinery noise is emitted. There are five different vehicles total (each a different color), and some construction worker bears doing various physical exercises to add more informational elements. The noises and flaps add interactivity for kinetic learners, and the repeated areas of the text make this a good choice for storytime.