Every month, we post an annotated bibliography of books that were rated ‘Outstanding’ and nominated for our Distinguished List at our previous month’s meeting. Members can see full reviews of these books and many more in the October edition of BayViews.

It’s a new school year, and Dory, her monster, and her fairy godmother
are ready for it. Hanlon’s pencil illustrations and strong characterization
combine for an unforgettable early chapter book experience. (1-3)

Earth has been invaded, and 12-year-old Alice and 300 other kids are evacuated to Mars for safety. Alice narrates with entertainingly British self deprecation and sang froid, as this intelligent and thought-provoking middle grade novel uses a scifi setting to mirror contemporary concerns. (5-8) 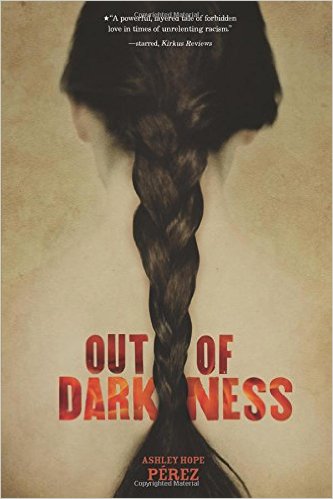 Out of Darkness written by Pérez, Ashley Hope; Carolrhoda Lab 2015

Set in East Texas in 1937, this compelling YA novel uses the real life explosion at a school as the backdrop and metaphor for the powerful racial tensions of the time. Mexican American Naomi starts an ill-fated love affair with Wash, an African American, while fending off the attentions of her white stepfather. (9-12) Inspired by his son’s battle with mental illness, Neal Shusterman (Unwind series, Simon & Schuster) has written an intense, unsettling, but also witty and intelligent, YA novel, putting the reader in the head of 15-yearold Caden Bosch, who suffers schizophrenia. (10-12)

The Whisper (The Riverman Trilogy) by Starmer, Aaron; Farrar, Straus and Giroux 2015

After the cliffhanger ending of the first book 12 year-old Alistair flees to the magical realm Aquavania, determined to find his friend and crush Fiona. Travelling from one darkly imaginative world to the next Alistair discovers answers that lead to more questions and the conviction that at the heart of each fantasy world are some very dark, uncomfortable and defining truths. (6-10)

Iron Rails, Iron Men, and the Race to Link the Nation: The Story of the Transcontinental Railroad written by Sandler, Martin W; Candlewick 2015

An expansive, dramatic photo-filled book design and an engaging, dynamic text combine to make this an essential book on the building of the Transcontinental Railroad in the U.S. The author deftly describes the plight of the Chinese workers and the Native American groups that were displaced.  (7-12)