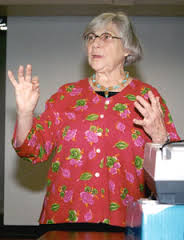 Author/Ilustrator Vera B. Williams Dies at age 88: Vera B. Williams, author and illustrator of at least 17 children’s books, died on October 16, 2015 at age 88. She was also a peace activist, spending a month in a federal penitentiary for participating in a blockade of the Pentagon. Williams received two Caldecott Honors, for A Chair for My Mother in 1983, and “More, More, More” Said the Baby in 1991, both published by HarperCollins. Born in Hollywood, CA, Williams moved with her family to the Bronx, NY, as a child, attending the High School of Music and Art. Later she received a BFA from Black Mountain College in North Carolina, in 1949. Her final book, Home at Last, will be published by Greenwillow in September 2016. She began work on the book some time ago, collaborating with illustrator Chris Raschka. www.slj.com/2015/10/industry-news/two-time-caldecott-honoree-vera-b-williams-dies-at-88/#_ . Wordcraft Circle Awards Announced: Wordcraft Circle of Native Writers and Storytellers announced their 2015 honors and awards on October 22nd. Founded in 1992, these awards honor books celebrating Native life, and according to their website, “are dedicated solely to the work and words of Native and Indigenous writers and storytellers.” The awards for books for youth are: