Every month, we post an annotated bibliography of books that were rated ‘Outstanding’ and nominated for our Distinguished List at our previous month’s meeting. Members can see full reviews of these books and many more in the May edition of BayViews. 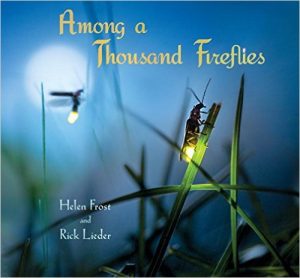 Among a Thousand Fireflies written by Frost, Helen and illustrated by Lieder, Rick; Candlewick 2016

An evocative, brief, free-verse poem describes the process a firefly goes through on a summer night when searching for a mate. The sumptuous color photographs, shot with a short depth of field, create a gauzy, poetic counterpoint to the verse. End matter completes this enchanting book. (K-3)

The Artist and Me written by Peacock, Shane and illustrated by Casson, Sophie; Owlkids Books 2016

A young boy joins in with the rest of the adults and children in his village in bullying a crazy artist, and years later reflects on his mistakes and the talent of the man he tormented, Vincent Van Gogh. A beautiful and meaningful story that celebrates both art and individuality. (1-3)

On a drab gray day a cat collects colors from nature and brings about a brilliant transformation. (B/T-1) 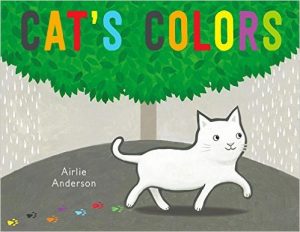 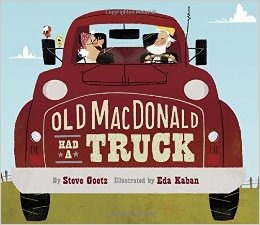 Old MacDonald Had a Truck written by Goetz, Steve and illustrated by Kaban, Eda; Chronicle Books 2016

Old MacDonald has a lot of heavy earth-moving equipment that will give children something to sing about. (PS-2)

Eighteen animals are joined with their homonymic and homographic verbs, sometimes doubled, sometimes tripled, in this excellent work of wordplay. The imaginative ink and watercolor illustrations clearly portray the meaning of the text and will be wholly appreciated by young readers as well as older English learners. (1-4)

Although this is not a sequel to the Newbery Medal-winning The Crossover (2014), this novel in free verse also features an 8th grade male protagonist who loves sports. Nick struggles with a strict father and a mother who moves away for a job opportunity, but finds solace playing soccer until appendicitis keeps him from participating in a national tournament. (5-9)

12-year-old bookmender Sophie Quire must unite four magical books in order to stop Inquisitor Prigg’s plan to burn all stories.The power and magic of stories and books is the potent theme of this thrilling and emotionally satisfying middle grade fantasy adventure, companion to Peter Nimble and his Fantastic Eyes (2011). (5-8)

Once Was a Time written by Sales, Leila; Chronicle Books 2016

Ten-year-old Lottie and her best friend Kitty live in England as Hitler approaches, but are suddenly separated, not only in space but also time. This moving and steadily flowing book will be a great read for the middle-grader. (4-7)

Nonfiction account of the lives and contributions of Irene Curie and Lise Meitner, who, during the 1930’s, were major players in bringing about the nuclear age. (8-12)