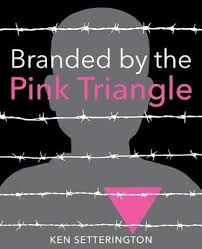 The Stonewall Honor Books in Children’s and Young Adult Literature are named annually to recognize English-language children’s and young adult books of exceptional merit relating to the gay, lesbian, bisexual and transgender experience. In 2014, ALA’s GLTB Round Table recognized three such titles. Better Nate Than Ever by Tim Federle was reviewed by ACL in November, 2012, while Two Boys Kissing by David Levithan has not been reviewed in BayViews.

I have recently finished the third, Ken Setterington’s Branded by the Pink Triangle (2013, Second Story Press) and highly recommend it for young adult and middle school library collections. Ken Setterington is the author of several other children’s books (e.g. Mom and Mum are Getting Married, and Clever Katarina, a Tale in Six Parts), and is retired from the fabulously-named position of Children and Youth Advocate for the Toronto Public Library (full disclosure: I served with him on a Newbery Committee). The subject of his Stonewall-winning title, the Nazi persecution of lesbians and gays in World War II, is not often discussed in books for young people, making this well-written and illustrated book as important as it is well-crafted.

In personal stories, well-selected photographs, and clear narrative prose, the book documents the Nazi policy of identifying homosexuals with pink cloth triangles and details the many types of abuse they subsequently faced. The openly gay community that flourished in pre-Hitler Berlin, and the repression that continued worldwide long after the end of World War II (and complicated the recognition of gay Nazi victims) are documented; also included are the official acknowledgments of the persecution that began in the late 20th century and the current “It Gets Better” campaign.

A wide range of experiences, touching and tender as well as horrifying, are presented as much as possible in the words of those who lived them. Small pages with generous white space make the book easy to pick up and browse through and the clarity of the writing and thoughtful selection of detail keeps the reader focused and engaged. Back matter includes a time line covering “events crucial for homosexual men in Germany” from 1871 through 2012 (when the last gay Jewish Holocaust survivor died), a bibliography, index, notes and photo credits.