Every month, we post an annotated bibliography of books that were rated ‘Outstanding’ and nominated for our Distinguished List at our previous month’s meeting. Members can see full reviews of these books and many more in the July edition of BayViews.

Chengdu Could Not, Would Not, Fall Asleep written and illustrated by Barney Saltzberg
Disney Hyperion, 2014.
A little panda in the bamboo grove cannot fall asleep, no matter what, in this clever take on a common subject. The illustrations are strong, dominated by black, white, and green for the bamboo, using pencil and watercolors that have a charcoal appearance. Perfect for a lapsit or toddler storytime, as well as a great bedtime read-aloud for parents. (Baby/toddler – Kindergarten) 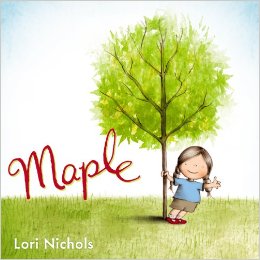 Nancy Paulsen, 2014.
A young girl makes the adjustment from relying on a tree for company to relying on the companionship of a little sister. Nichols’ pencil on Mylar illustrations and spare text exude a charm missing from the vast majority of new sibling picture books. (Preschool – Kindergarten)

A Piece of Cake written and illustrated by LeUyen Pham
Balzar + Bray, 2014.
A lovely, funny readaloud with bright colors and a message of kindness and cleverness. (Preschool – Grade 1)

Send for a Superhero by Michael Rosen; illustrated by Katharine McEwen

Candlewick, 2014.
Rosen and McEwen’s art, pacing, and insight into a child’s imagination place this bedtime tale above the rest. (Preschool – Grade 1)

The Crossover by Kwame Alexander
HMH, 2014.
Seventh grade twins, Josh and Jordan Bell, are kings of the basketball court- headed for the championship. Told in free verse and concrete poetry from Josh’s perspective, this fast paced novel about an African American teen and his strong family touches on tragedy, talent, passion and the hard work of growing up. (Grades 5 – 10)

Loot: How to Steal a Fortune by Jude Watson

Scholastic, 2014.
In a rollicking farce that tickles and thrills, a group of kids plan and carry out a series of jewel heists at the expense of ethically challenged adults. Madcap adventure, elements of wishful fantasy, and cinematic scenes make this laugh out loud, hair-raising picaresque novel a rousing read. (Grades 5 – 8)

The Qwikpick Papers: Poop Fountain by Tom Angleberger
Abrams, 2014.
Who can resist being among the last to see a 20 million gallon poop fountain? Middle-schooler Lyle, and his friends Dave and Marilla decide Christmas Day is the perfect time to sneak into their town’s sewage treatment facility. Angleberger, the creator of the Origami Yoda series, has written an original, realistic, diverse and entertaining farce. (Grades 3 – 7)

Scholastic, 2014.
Sunny, a 12-year-old white girl in 1964 Mississippi, is the main narrator of this thoughtful novel, describing the summer when Northern college students came to town to help African-Americans register to vote and run summer programs for children. There is a secondary narrator, Raymond, an African-American teen in the same town; the reader gets to hear his take on the Freedom Summer experience in contrast to Sunny’s. This novel contains a wealth of photographs, posters, song lyrics, and newspaper clippings from that time. (Grades 5 – 9)

Say What You Will by Cammie McGovern
HarperTeen, 2014.
In her first YA book, McGovern succeeds in creating memorably quirky characters and charting the agonizing fits and starts of first love in a romance of “oddballs finding each other”, that will appeal to fans of Eleanor and Park (Rowell, St. Martin’s Griffin, 2013) and graduates of Out of My Mind (Draper, Atheneum, 2010). (Grades 8 – 12)

She Is Not Invisible by Marcus Sedgwick
Roaring Brook, 2014.
Far removed from the Gothic fantasy of his Printz award winning Midwinterblood (2013), Marcus Sedgwick’s new YA mystery wraps a contemporary story of a blind girl searching for her father around the idea of “hidden patterns in the universe”. (Grades 8 – 10)

We Were Liars by E. Lockhart