Reynolds, Aaron.   Creepy Carrots!   Jasper Rabbit wants some of the carrots that grow in a nearby field, but shadows and a “Twilight Zone” vibe frightens him.

Savage, Stephen. Ten Orange Pumpkins: a Counting Book.   Counting down from ten to one, see pumpkins vanish in this funny Halloween story.

Cronin, Doreen. Click, Clack, Boo! A Tricky Treat.   In the sixth book in the series, the animals take Farmer Brown’s Halloween candy and hold a party in the barn.

Christelow, Eileen. Five Little Monkeys Trick or Treat.   Lulu the babysitter has trouble keeping track of the five monkeys, because they switch costumes with other children while out trick or treating.

Biedrzycki, David. Me and My Dragon: Scared of Halloween.  A timid dragon needs encouragement from his boy to choose the perfect Halloween costume.

Hood, Susan. Just Say Boo!   The repeated “Boo!” in the text will foster participation from your listeners, in this story of three kids out trick or treating.

Armstrong-Ellis, Carey. Ten Creepy Monsters.   Monsters disappear, counting down from ten to one, in this slightly scary story.

Landry, Leo. Trick or Treat.   A ghost delivers invitations to his Halloween party, but one invitation accidently ends up in the hands of two human children. Guess what happens when the kids get to the ghost’s party!

Paquette, Ammi-Joan. A Ghost in the House.   In this cumulative story that invites audience participation, the residents of a haunted house are counted.

Williams, Linda. The Little Old Lady Who Was Not Afraid of Anything.   In this classic, a little old lady is followed by a pair of pants, a shirt, two shoes, and a pumpkin head. Kids will help act out the movements and call out repeated phrases.

Berenstain, Jan and Stan. The Berenstain Bears and the Spooky Old Tree.   Concepts of opposites are demonstrated in this very brief but engaging story of a mysterious tree.

Donaldson, Julia. Room on the Broom.   The wind blows off the witch’s hat, wand, and bow but three animals find them. They would like a ride on her broom as a reward for returning the items. 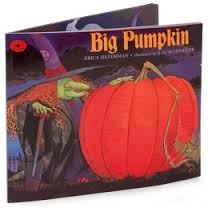 Silverman, Erica. Big Pumpkin.   In this Halloween take-off of the folktale The Enormous Turnip, the witch’s friends Vampire, Mummy, and Werewolf try to help her pull up the big pumpkin so she can make pumpkin pie.

Kohara, Kazuno. Ghosts in the House!    A little witch figures out a way to rid her haunted house of ghosts.