This month will conclude a series of short reviews of new board books, begun in the March 2018 BayNews, and continued in the May 2018 BayNews. 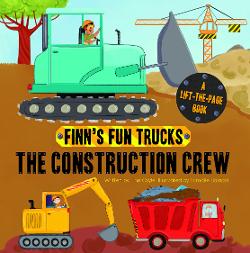 Coyle, Finn. “Finn’s Fun Trucks” series. Illus. by Srimalie Bassani. Flowerpot Press, 03/2018. [12p.] $10.99 each. The Clean-up Crew. 978-1-48671-388-2. The Construction Crew. 978-1-4867-1387-5.      This new series focuses on community helper vehicles, such as sanitation trucks. An ethnically diverse group of workers, including a female, demonstrate vehicles they use on the job. For each spread, there is a sturdy board gatefold page that opens on the right, showing the vehicle in action. The narrative is straightforward, and each truck is shown with captions noting the main parts. The full color artwork is well done; this series has great toddler appeal.  Look for Rapid Responders and Farm Fleet to be released this August.

[22p.] 978-0-7352-6285-0.      “Anne of Green Gables” is the inspiration for this series, which feature fabric collage artwork. Each illustration uses a variety of fabrics sewn onto an off-white fabric background, using machine stitching. Anne’s hair is made of orange yarn, and the overall effect is pleasing and in line with the setting of the original books. The text is made up of the word for the concept and another noun for the item being shown; for example “6 toadstools,” or “blue sky.”  There are better concept books but this will certainly please fans. 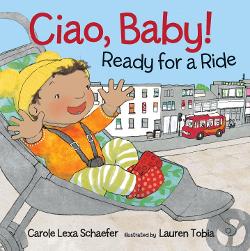 Baby! Ready for a Ride. 978-0-7636-8397-9.      A brown skinned baby is on the way to Nonna’s house with his Mamma, using a bus, train, and boat in a city filled with ethnically diverse people, in Ready for a Ride. In the other title on the park, Nonna takes baby to the park to see various animals. Both books feature texts that tell a straightforward story using some onomatopoeia, and the watercolor with thin black outline artwork serves the text. A nice depiction of a modern urban family.

Scheffler, Axel. “Farm Friends Sound Books.” Illus. by Axel Scheffler. Nosy Crow, 02/2018.  [12p.] $9.99 each. Gobbly Goat. 978-0-7636-9620-7. Portly Pig. 978-0-7636-9621-4.      With a charming four-line rhyme per spread, each book describes an animal on an outing – the pig to a mud hole, goat looking for a snack on the farm. The full color artwork depicts the animals with bulging eyes, but otherwise they are basic farm animals (no clothes here!). The main attraction to the series is a button on the bottom right that offers the animal’s sound when pressed. These are fun but could be problematic in a library (the noise quickly gets annoying) and may not hold up to library circulation.

Gomi, Taro. Little Truck. Illus. by Taro Gomi. Chronicle, 04/2018. [22p.] $6.99. 978-1-4521-6300-0.      A large semi-truck follows Little Truck as he attempts to climb a hill and drive through a tunnel. This sweet and simple story is illustrated in deeply saturated colors of tan, pink, orange, and gray with thick black outlines, done in the style of a child’s drawing. Not essential but a nice story for a parent and child to share. 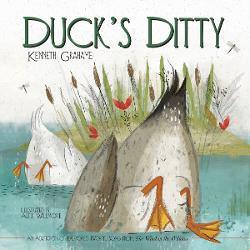 the Willows, this rhyming verse concerns ducks swimming in a pond. Many will not know the song, but it works fine as a rhyming story. The exemplary artwork depicts realistic ducks in a natural setting and is a strong component of this oversized board book.

Slater, Nicola. Happy Birthday to You! Illus. by Nicola Slater. Nosy Crow, 04/2018.  [10p.] $16.99. 9780-7636-9943-7.      Various animals travel to the same place, playing musical instruments along the way, until they arrive to play for a birthday party. There is a small button on each spread – when pressed, the reader will hear a few notes of the title song. The final illustration shows a cake with a candle that lights up. The rhyming text and color cartoon artwork are fine, but this is likely to wear out quickly, so it may be better suited for home use only. 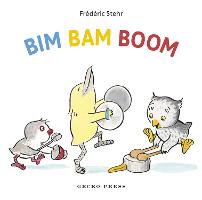 Stehr, Frederic. Bim Bam Boom. Gecko Press, 01/2018.  [26p.] $12.99. 978-1-776571-36-9.      An owl, chick, and duck make music using pots and pans from the kitchen in this great use of onomatopoeia. Other birds join in the fun until Mama Owl gives them cake. A fun book for baby storytime – pass out shakers for the audience to use while telling the story. Simple outlined watercolors on white backgrounds serve the tale, and the text is mainly the sound words and a few snatches of dialogue.