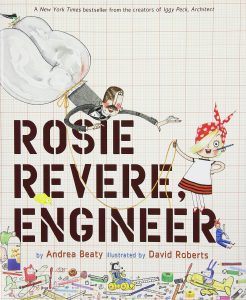 Science-focused story times can be fun at any time of year.   For a Physics theme, one activity is to put out Duplo and Lego blocks for free play to help children develop their building skills.  Or, make this simple science demonstration showing the effects of friction on movement.

Berry, Lynne.  WHAT FLOATS IN A MOAT?    The concept of buoyancy is simply described in this comedic story featuring a goat and hen.

Boothroyd, Jennifer.  GIVE IT A PUSH! GIVE IT A PULL! A LOOK AT FORCES.    Photos and a simple text describe basic physics concepts of motion and friction.

Mayer, Lynne.  NEWTON AND ME.    A young boy and his dog learn about Newton’s Laws of Motion while pulling a wagon, riding a bike, etc.

Stille, Darlene R.  MOTION: PUSH AND PULL, AND FAST AND SLOW.    The concepts of force and motion are demonstrated at a playground.