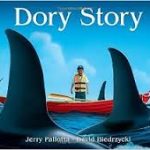 Clements, Andrew. BIG AL.    Big Al the blowfish is teased for being ugly, but when he helps the other fish who are caught in a net, they see beyond his appearance and become Al’s friends.

Metzger, Steve. FIVE LITTLE SHARKS SWIMMING IN THE SEA.    A counting book patterned after the fingerplay Five Little Monkeys Jumping on the Bed.

Oppel, Kenneth. PEG AND THE WHALE.    Peg is raised on a ship and is a great fisherman. She sets her sights on catching a whale.

The ocean’s food chain is explored in this simple story of a boy’s imagination.

Rose, Deborah Lee. INTO THE A, B, SEA: AN OCEAN ALPHABET.    Twenty-six ocean animals are featured in this entertaining alphabet book.

Ryan, Pamela Munoz. HELLO, OCEAN!    Using her five senses, a girl describes how she experiences the wonders of the ocean.

Sherry, Kevin. I’M THE BIGGEST THING IN THE OCEAN.    A giant squid brags about being so large until he meets someone bigger!

St. Pierre, Stephanie. WHAT THE SEA SAW.    A rhyming story about sea inhabitants.

Ward, Jennifer. SOMEWHERE IN THE OCEAN.    A counting book in rhyme, showing ocean creatures and their young.

Wood, Audrey. TEN LITTLE FISH.    A counting book with a story of fish who one by one leave the ocean reef.