Even preschoolers need to understand the concept of mon­ey, as they often ask a parent to buy them something while at the store. But when the economy is bad, it can be difficult for preschoolers to understand why they can’t get what they want. There are lots of great books on how to use and save money, and even some on why a parent may not have the money to buy something the child really wants.

For a craft, you can make “Bunny Money” by photocopy­ing the endpapers of Rosemary Wells’ book of the same title. There are also instructions and a printout of bunny money on Wells’ website.

Best, Cari. SALLY JEAN, THE BICYCLE QUEEN.   When she outgrows her bike, Sally Jean figures out a way to get a larger bike without spending money.

Brisson, Pat. BENNY’S PENNIES.   Benny has five pennies-is that enough to purchase a gift for each member of his family? Simple rhymes and the torn-paper collage illustrations make this perfect for toddlers and preschoolers. 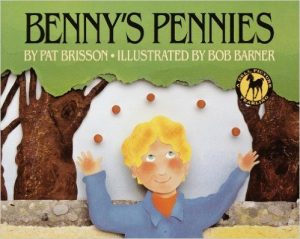 Brown, Marc. ARTHUR’S TV TROUBLE.   Arthur earns the money to buy something advertised on TV but learns that those ads are not always truthful.

Carlson, Nancy. START SAVING, HENRY!   Henry the Mouse realizes how difficult it is to save up money for something special, such as the robot toy he wants.

Inkpen, Mick. THE GREAT PET SALE.   With flaps, this short and funny book is a great attention-grabber. A boy goes into a pet store and calculates what he can buy, while a rat keeps begging to be purchased for “only one cent!”

Leedy, Loreen. FOLLOW THE MONEY.   A quarter tells his story, from being minted to being used for various purchases, until he is back at a bank.

Mollel, Tololwa. MY ROWS AND PILES OF COINS.   A boy in Tanzania saves his money to buy a bike, but he never seems to have enough money.

Schwartz, David M. IF YOU MADE A MILLION.   Part of Schwartz’s series of picture books on numbers, this one explains money.

Sun, Chyng Feng. MAMA BEAR.   Mei-Mei doesn’t earn enough money for the bear in the store window, but her mother shows her how to appreciate something she already has.

Viorst, Judith. ALEXANDER, WHO USED TO BE RICH LAST SUNDAY.   Alexander begins the story with a dollar, but soon he is parted from that money.

Hazen, Barbara Shook. TIGHT TIMES.   A boy wants a dog, but his father is out of work and they cannot afford one. But he finds a kitten-a Reading Rainbow selection.