Animal-themed storytimes are always a hit, especially if it is a pet animal that can be brought in for the children to see. This would include guinea pigs! A special thanks to Shannon Kruer, Oldham County Public Library, KY, for some of these ideas.

For a craft project, you can have a handout with a picture of a guinea pig, and have the children glue cotton balls on the picture to represent fur. Or, make a guinea pig sock puppet as shown here. 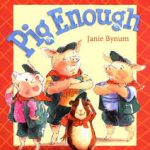 Bynum, Janie. PIG ENOUGH.    Guinea pig Willy wants to join the Pig Scouts (which is for regular pigs), and he proves he is up to the challenge.

Child, Lauren. I COMPLETELY KNOW ABOUT GUINEA PIGS.    Bert the guinea pig goes to Lola’s house for summer vacation where something surprising happens.

Cuyler, Margery. GUINEA PIGS ADD UP.    Mr. Gilbert buys another classroom guinea pig because the first one looked lonely, and soon there are many more guinea pigs!

Duke, Kate. ONE GUINEA PIG IS NOT ENOUGH.    Counting and basic addition are part of this enjoyable book, first in a series.

McGinty, Alice B. ELIZABETH’S KINDERGARTEN PET.    At first, Elizabeth is afraid of the class guinea pig. But when it gets lost, Elizabeth helps find it.

Meade, Holly. JOHN WILLY AND FREDDY MCGEE.    After escaping from their cage, two guinea pigs have an adventure through the tunnels of the family’s pool table.

Ohi, Ruth. A TRIP WITH GRANDMA.    Clara and Sprout go on vacation with grandma in this brightly illustrated tale for toddlers.

Rylant, Cynthia. LITTLE WHISTLE.    In this first book in a series, a small guinea pig Little Whistle talks to the toys late at night.

Shannon, Margaret. GULLIBLE’S TROUBLES.    When teased at his relative’s house, Gullible discovers something in the basement that helps him get even!