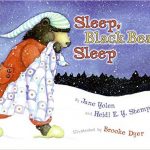 One of the first science concepts a preschooler learns about is hibernation. There are many wonderful books about animals, from bears to frogs to skunks, and hibernation. For a craft project, try the cave made out of a brown paper bag. Aside from bears, other animals that hibernate include skunks, frogs, bats, groundhogs, ladybugs, turtles, raccoons, snakes, and squirrels.

Arnosky, Jim. EVERY AUTUMN COMES THE BEAR.    Dramatic full color illustrations add details to this brief story of a bear that shows up at a farm before finding his way to a den to hibernate.

Brian, Janeen. TOO TIGHT, BENITO!    Because Benito Bear has grown over the summer, he has trouble finding a comfortable place to hibernate.

Cooper, Elisha. BEAR DREAMS.    A bear persuades his friends to play instead of hibernating.

Helquist, Brett. BEDTIME FOR BEAR.    Even though it is time for Bear to hibernate, his animal friends encourage him to play with them.

Krensky, Stephen. CHAUCER’S FIRST WINTER.    Instead of sleeping in winter, Chaucer stays up, afraid he will miss some fun.

London, Jonathan. FROGGY GETS DRESSED.    Froggy wants to play in the snow, but eventually goes back to bed since he should be hibernating!

Meadows, Michelle. HIBERNATION STATION.    A rhyming text introduces children to a variety of animals that hibernate.

Rosen, Michael. I’M GOING ON A BEAR HUNT.    Technically not a hibernation story, this is a great interactive chant, that involves finding a bear in a cave.

Yolen, Jane. SLEEP, BLACK BEAR, SLEEP.    Told in a rhyming text about different animals that settle down for winter.