To partner with the Television theme we offered in November 2012, here is a companion theme of Computers and Technology. We all know even babies like to play with iPads, so a storytime on computers will give you an opportunity to share tips with parents on appropriate use of computers by preschoolers. Have a handout on educational apps, your online picture book services such as Tumblebooks or Book Flix, and be available to answer questions parents may have. For a craft project, make “Starry Night” pictures to go along with John Rocco’s Blackout: using white or silver crayons, draw stars on black construction paper. Or use star-shaped stickers on black paper to replicate the night sky.

Brown, Arthur. ARTHUR’S COMPUTER DISASTER.    Arthur breaks his mother’s computer while playing a videogame, after she asked him not to touch it.

Buzzeo, Toni. BUT I READ IT ON THE INTERNET!    Mrs. Skorupski teaches the class how to decide when the internet is reliable or providing false information.

Collins, Suzanne. WHEN CHARLIE MCBUTTON LOST POWER.    In this rhyming story, Charlie takes a battery out of his sister’s doll to play videogames after the power goes out.

Cordell, Mathew. HELLO HELLO.    A little girl enjoys playing outside while the rest of her family members are stuck to their electronic devices.

Deedy, Carmen Agra. RETURN OF THE LIBRARY DRAGON.    Miss Lotta Scales plans to retire but first she must ensure that computers won’t replace books in the library.

Droyd, Ann (pseudonym). GOODNIGHT IPAD: A PARODY FOR THE NEXT GENERATION.    In this spoof of Margaret Wise 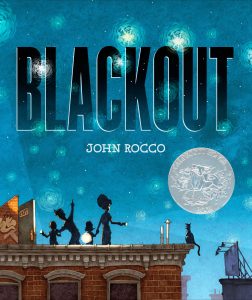 Brown’s Goodnight Moon, a family says goodnight to all their electronic devices.

Meng, Cece. BEDTIME IS CANCELED.    When two siblings write a note that “bedtime is canceled,” it is soon spread on social media and becomes a sensation.

Rocco, John. BLACKOUT.    When the power goes out, the family goes up to the roof of their apartment building and talk to their neighbors.

Smith, Lane. IT’S A BOOK!    Monkey explains to jackass that a book doesn’t need to scroll, be recharged, or open with a password.

Tulle, Herve. PRESS HERE.    In this unusual book, circles in each illustration appear to move, like a videogame.

Yaccarino, Dan. DOUG UNPLUGGED.    Instead of downloading information, Doug the Robot goes out to explore the city and learn facts for himself.