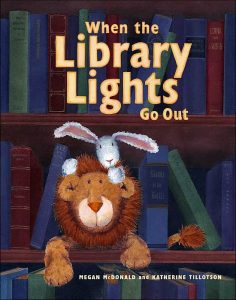 Summer is a great time to have a storytime on puppets, since many older siblings will attend with their preschool brothers and sisters. These stories can be a great way to prepare the children for what a puppet show will be like. For a craft, make simple paperbag puppets so the children can choose what characters they would like to be.

Charlip, Remy.  MOTHER, MOTHER, I FEEL SICK.    This funny story of a stomachache is illustrated as a shadow puppet play.

McDonald, Megan.   WHEN THE LIBRARY LIGHTS GO OUT.    After hours in the library, the storytime puppets go in search of their missing friend Hermit Crab.

Sif, Birgitta.  OLIVER.    Oliver’s only friends are his puppets and stuffed animals, until a ball rolls into his yard and he meets neighbor Olivia.

Weiss, George.  WHAT A WONDERFUL WORLD.    A picture book version of the popular song, depicted in the illustrations as a puppet show, including a puppet resembling Louis Armstrong.