These storytime ideas were inspired by the 2011 Summer Reading theme “One World, Many Stories.” For a craft, paper boomerangs are a big hit, but you have to warn the kids not to throw them at each other. 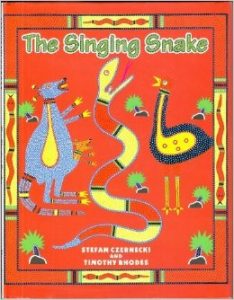 Czernecki, Stefan. THE SINGING SNAKE.    An Aboriginal folktale with stunning artwork. Snake captures Lark in his throat so he can win the contest of who has the most beautiful voice.

Fox, Mem. HATTIE AND THE FOX.    Hattie the Hen is on the lookout for the fox, in this story with repetition and animal noises.

Fox, Mem. SHOES FROM GRANDPA.    In this cumulative tale, a little girl receives a variety of clothing for her birthday.

Fox, Mem. KOALA LOU.    Koala Lou wishes her mother would pay her more attention so she tries to win the Bush Olympics to get noticed.

Larranaga, Ana Martin. BIG WIDE-MOUTH FROG.    In this version of the traditional tale, the frog meets a kangaroo, possum, koala, and emu to find out what they eat.

Morpurgo, Michael. WOMBAT GOES WALKABOUT.    While searching for his mother, Wombat meets several other animals in this tale with repeated phrases.

Murphy, Stuart J. JUMP KANGAROO JUMP.    Kangaroo and his friends divide into teams for the Field Day in this simple math story.

Paterson, A. B. WALTZING MATILDA.    A picture book version of the popular Australian song.

Ungerer, Tomi. ADELAIDE.    Adelaide the kangaroo has wings so she sets off to see the world.

Vaughan, Marcia. WOMBAT STEW.    A spoof of Stone Soup, this energetic rhyming story stars a dingo who tries to get the other animals to help him make Wombat Stew.