Spring Board Books, Part II: Last month, in Part I of our semi-annual Board Book Round-up, we discussed new board book series and individual titles released in early 2015. Today in Part II we will finish the Round-up with new books featuring popular characters, and board books derived from picture books.

Maisy the little white mouse is back in this simple description of farm activity. Part of a series of Maisy board books that focus on transportation, many Maisy fans may not know what a tractor is, but that’s fine. There is a push for children to learn more about where their food comes from, so this farm story will help meet that goal. The deeply saturated full color cartoon illustrations are a great match to the text. Another “Maisy” success!

Anon. “Tiny Tab” series. Illus. by Jannie Ho. Nosy Crow, 2015. 8p. $7.99 each. Cutie Pie Looks for the Easter Bunny. 978-0-7636-7599-8.Pookie Pop Plays Hide-and-Seek. 978-0-7636-7600-1.   This series debuted last year, with sturdy tabs that a toddler could use. Often tabs are too fragile or too small for this age group, but that is not the case with this charming series with a “hide and seek” theme. Each book has four very sturdy pull tabs (two on the side, two on the top), that the child can pull to reveal characters or items hidden in a cut-out. For example, pull the tab and see where friends are hiding, or where Easter eggs are hidden.    The full color cartoon style illustrations are charming and suit the stories; the mechanics of the book naturally fit into the pictures. The cut-outs in trees or flower beds are painted the same colors as the backgrounds so they also are incorporated into the pictures in a natural way that doesn’t break up the illustrations. Jannie Ho is an accomplished illustrator.   The text, which is not attributed to an author, is straight-forward and helps the child know what to find. For example, it asks “Is the Easter Bunny in the playhouse?” This series is very successful and will be popular.

Davies, Benji. “Bizzy Bear” series. Nosy Crow, 2015. 8p. $6.99 each. Benji Bear Knights’ Castle. 978-0-7636-7602-5.Benji Bear Zookeeper. 978-0-7636-7603-2.     In this series of board books with sliding tabs, a bear is involved in different vocations. The text has the rhythm of a jump-rope rhyme: “Bizzy Bear, Bizzy Bear, at the zoo. Bizzy Bear, Bizzy Bear, I see you!” The repeated name will encourage toddlers to participate in reading the simple story.      The sliding tabs help to reveal aspects of the story, from opening a croc’s mouth to moving Bizzy’s sword. The color cartoon illustrations and the sliding tab mechanics work well together and should please the intended audience.

Board Books from Picture Books 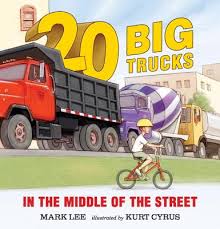 With short and bouncy two-line rhymes, toddlers can count the many vehicles in this realistic story of a traffic jam. The artwork may have been digitally generated but has a warm feel, while depicting a variety of trucks that kids can identify (garbage, mail, tow, delivery, and more). There is a great overhead illustration where the child can count each of the trucks. This is fun, has a counting element, and will certainly be popular.

The board version of this sweet story is successful, since the original picture book was relatively small in size. Plus, the simple cartoon illustrations (mixed media that resembles watercolors with ink outlines), on white backgrounds, work well in this small size. Each spread features the title characters, a blue bird and yellow duck, in a park, without a lot of extraneous detail. The text features four line rhymes per page, describing their playtime, which includes a potty break, making this perfect for toddlers.

Father bear consoles Hansie who has several accidents (skinned knee, etc.), with the title phrase. Listeners will repeat the title anytime someone has an injury, but the text is somewhat lengthy for the toddler audience. The full color artwork resembled color pencil with deep watercolors, and is adept but like the text, a little on the sweet side. The picture book version is preferred over the board book, but this is not as memorable as McBratney’s popular “Guess How Much I Love You” series.

The narrative of this book is very similar to Brown’s Runaway Bunny – mom tells her child over the phone that she will get back home no matter what. The child offers various scenarios that could interfere: what if the plane forgets how to fly, or the balloon runs out of hot air? The child’s dialogue is in a deep blue typeface that looks hand-lettered, and Mom’s is in a small, regular font, but there is too much text for a board book. In the picture book, the text and detailed illustrations look fine, but don’t work in the board version as they are too small.

One of my favorites to offer at a dinosaur storytime, the picture book version is the preferred edition of this colorful rhyming book. Each page has several sentences of text, describing various types of dinos (eight different species), with onomatopoeia and a repeated chant that will inspire audience participation. But the board version is too small to hold all of that text and the full color cartoon illustrations; stick with the picture book version.

Dinah hatches and stomps and eats many things in her path, but wants to try a kiss. Unfortunately, that involves biting whatever she is kissing, even another newly hatched dinosaur. This is fun and silly, and doesn’t really make sense, but toddlers will relate to the anarchy and the full color cartoon dinos and very brief text.

In this rhyme similar to “Ten in a Bed,” (the popular storytime fingerplay), guinea pigs star as party guests. The illustrations feature cartoonish guinea pigs, easy to pick out and count, due in part to the cream colored backgrounds and pleasing but limited amount of detail. This is a very successful adaptation, since the toddler audience can count the expressive characters, see both the numeral and word for each number, and guess each answer due to the rhyming text. Even if your library owns the picture book version, you will want to own multiple copies of this board book.

Previously part of What’s Your Sound, Hound the Hound?, an easy reader, this board book is similar to Sandra Boynton’s humorous animal board books. As they prepare for a tea party, Cat asks each animal to make a sound, which the audience can call out – Woof, Moo, and so on. But when Cat gets to Bunny, it gets complicated! The cartoons are in a deeper shade than Willem’s “Pigeon” series, making it easy for very young children to guess the animal shown. This is a successful adaptation of the picture book.

Perfect for Valentine’s Day, this simple tale describes a kiss that is passed from one animal to another, like a game of “Telephone.” The kiss begins and ends with a young girl and her cat, and the rhyming text is clear – ask the child to identify each animal that is shown. Sweet’s inviting watercolors focus just on the girl and one or two animals per page, making this a book that is accessible to toddlers.