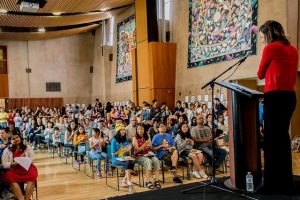 The San Jose Public Library was most appreciative to be chosen as a recipient of the 2018 ACL mini grant program. This grant was used to fund supplementary programs for our 10th annual Graphic Novel Making Contest, a program in which patrons create their own graphic novels. This program has shown so much growth over the years, we wanted to use it as an opportunity to contribute to the artistic growth of our talented and enthusiastic patrons.

This funding was used to facilitate four different drawing classes taught by experienced art educators to help children and teens learn about various aspects of comic creation to achieve more professional graphic novels. This included Character Design Elements for Tweens at Biblioteca Latinoamericana on June 2nd with 15 participants. Meggie Ramm had a lot of great personalized contact with the children and most of the kids went on to participate in some of the other programs during the summer. Second, we offered Face and Figure Drawing for Teens at the Tully Community Branch Library on June 15th with 18 participants. Yael Levy worked with a wide range of ages and taught them figure drawing fundamentals. Afterwards, many patrons requested an ongoing drawing class, and we were able to find a volunteer for a weekly drawing class.

Next, we held Manga for Beginners at Martin Luther King Jr. Library’s Teen HQ on June 16th with 15 participants. Mai Blasich shared a lot of drawing tips she wished she had known as a student and offered portfolio reviews and one-on-one feedback for the teens. Lastly, our final class was Creating Dynamic Characters at the Edenvale Branch Library on June 21st with 42 participants. This had the most attendance, as many participants had attended one or more of the previous sessions, and Susan Beneville focused on writing and story building.

Finally, on August 25, 2018, we held the award ceremony of the Graphic Novel Making Contest at the Seven Trees Community Center Banquet Hall where 350 people attended. When participants arrived at the award ceremony, they received a certificate for participating in the competition, a voucher for free admission to the San Jose Museum of Art, a book voucher, and a drawing prize ticket. The banquet hall was decorated with copies of contest submissions so participants see their own work displayed and view the work of others. Light refreshments were offered as well.

Library Director Jill Bourne hosted the event, introducing our guest speakers and announcing drawing prize numbers throughout the ceremony. Our first speaker, Matt Silady, the comics department chair at California College of the Arts, bubbled with excitement as he discussed the importance of learning about comics to create great comics. Nidhi Chanani, author of the beloved graphic novel Pashmina, was our second guest speaker. She talked about challenging herself and presented her artistic growth, showing drawings from her childhood and the progression of her talents, explaining that even professional artists were novices at some point too. Everyone felt inspired after the presentations and children could be overheard planning their next graphic novel endeavors.

After the ceremony, all participants were able to redeem their book voucher for a graphic

novel of their choosing; we had several popular selections based on age group including Babymouse, Smile, and Dogman. Nhidi also had a table where she sold and signed books, including Pashmina, and could talk to participants one-on-one. Those that were unable to attend the ceremony could pick up their comic submissions, certificate, museum ticket and book voucher from their library branch. Only a few winners were not present and were contacted after to receive their additional prizes.

While GNMC and the classes leading up to it were a huge success, we made some notes for improvement going forward next year. In terms of the classes, one of the lessons was based more on character development than drawing and the feedback we received asked for more of a focus on illustration. As for the award ceremony, we may need to begin looking for a larger venue to host future award ceremonies to accommodate our growing number of participants and their families. Additionally, for future artist speakers, we will confirm that they bring enough merchandise to accommodate our large group, as Nhidi unfortunately did not bring enough copies of her book to sign. We will also explore streamlining the book giveaway process, but this is dependent on which venue we use next year.