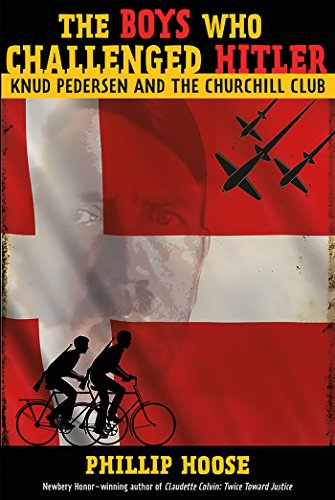 This riveting non-fiction account of a little known piece of WW II history tells how a group of teenage boys inspired the Danish resistance after the Germans occupied their country in April, 1940. Incensed by the passivity of most Danes, Knud Pedersen, his brother, and friends formed the Churchill Club, named after the British leader, to commit acts of sabotage. Eventually, the boys were jailed for several years, but their exploits, and subsequent trial and imprisonment became the catalyst for more significant and organized resistance. Much as he did with Claudette Colvin, Twice Toward Justice (2009), Hoose uses the evocative words of those involved, gathered mainly from interviews he conducted with Pedersen himself, and surrounds these with the necessary context to help the reader grasp the full historical significance. The book is filled with b&w photographs, along with Pedersen’s own sketches. The bibliography and notes are thorough and substantive enough for a research project, and an epilogue details what happened to many members of the club after they were released from prison. This is a gripping, well-told story that will appeal to teen fans of both narrative non-fiction and adventure fiction.