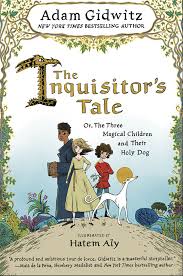 Gidwitz (A Tale Dark and Grimm, 2010) tackles medieval life, religious intolerance, and the power of deep, loyal friendships—all with a healthy dose of fun, adventure, and brilliant storytelling. Beginning at a travelers’ inn, a narrator whose trade is collecting tales describes three children fleeing for their lives from Louis, the powerful king of France. The children are ostracized, isolated in their own ways, until fate brings them together. Jeanne’s neighbors worry that her seizures and visions mean she’s possessed by witchcraft. When her dog Gwenforte, who saved her life as a baby, comes back to life, Jeanne escapes into the forest. Jeanne meets up with William, a young African oblate (a monk-in-training), and Jacob, a Jewish boy whose village was burned to the ground by an anti-Semitic mob. Each child is wary and full of fear at first, but they grow to trust each other as they band together to escape persecution. Told in multiple voices in a style that evokes the Canterbury Tales, the story unfolds as different travelers share their portion of the children’s story. Hatem Aly’s illuminated marginalia, line drawings around margins and chapter headings, provide both humorous relief and concrete grounding for this complex story. Gidwitz prompts readers to consider the divisions of class and religion in the Middle Ages, as well as the changes brought by urban centers, trade, and education—changes that often led to collaboration as well as collision. These weighty issues never bog down the storytelling fun; a final author’s note provides historical background for the story and context for considering issues society still wrestles with today. Incidentally, the excellent audiobook version is narrated by the author and a full cast, bringing to life the many voices telling this story.