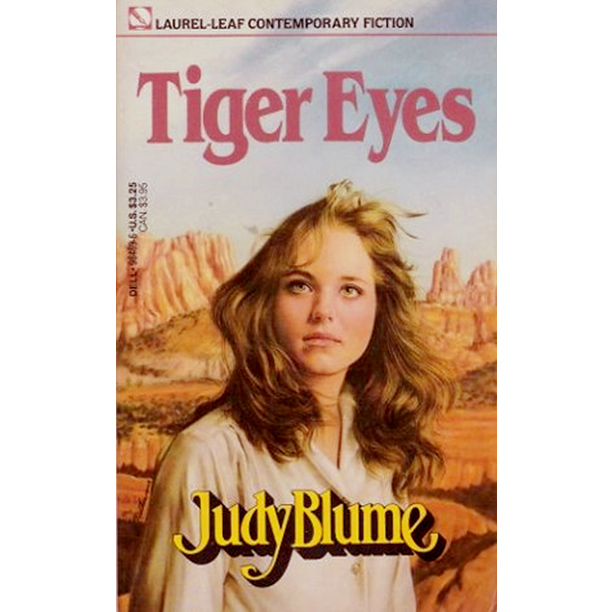 Libraries may see tweens and teens requesting Tiger Eyes, a Judy Blume book from more than 30 years ago, because it was recently released as a new feature film.  Co-written and directed by Blume’s son Lawrence, the film (which I haven’t seen yet) seems to focus more on the main character’s friendship with Wolf (based on the publicity for the film), than it does in the novel.

The main character is 15-year-old Davey, a girl dealing with the shooting death of her father, and the family’s temporary move from the Jersey Shore to Los Alamos. Davey’s friendship with Wolf, in the book, is a relatively minor part of her year-long process of coping with her loss.  Her mother and little brother cope differently but all of their experiences seem authentic.

Less well-rounded are the characters of Davey’s aunt and uncle with whom they live, who seem like stereotypes. Aunt Bitsy (Bitsy? Really?) comes off like a subtly racist society matron, while Uncle Walter is an impatient scientist at Los Alamos, lecturing Davey on morals when she thinks he is immoral for helping to build weapons.  Although this takes place in the present, the history of Los Alamos as the site of the building of atomic bombs is a key component of the plot and themes of the book.

For a book over 30 years old, it doesn’t seem that dated.  In fact, the racism depicted by the white families in Los Alamos, mainly against the Latino residents, seems contemporary – similar to the recent laws in Arizona that targets anyone who “looks” like an undocumented immigrant. There are a few pop culture references but only a few, so it won’t create any barriers to contemporary tweens who can appreciate Davey’s story.  And unfortunately, Davey’s father’s death (as the novel begins, he has been shot during a hold-up of the family’s convenience store), is especially timely with the heightened discussions on gun deaths recently.

Davey’s friendship with Wolf, which is not really a romance, happens when she meets him a few times while she is hiking, and later when she is a hospital volunteer.  She is intrigued by him, but there is no romance outside of an innocent kiss. The only thing that happens in the book that may disturb some parents is the drinking done by some of the high school students, but not by Davey; in fact, she points out to her friends that getting drunk is “stupid.”

Even if a reader has not been touched by violence or a death in the family, Davey’s story will help the reader understand how that affects people.  Davey goes through the customary stages of grief, as does her mother, but they cope pretty well considering how shocking it is. Luckily, they have relatives who they can live with; often this type of death causes the family to plunge into poverty and sometimes homelessness.

In many ways, the best scenes in the book are Davey’s visits to Mr. Ortiz, one of the hospital patients where she volunteers, who she later discovers is Wolf’s father. Mr. Ortiz is dying of cancer, and they have some really nice conversations; when Wolf visits the hospital Davey figures out they are related, which gives her a bond with Wolf who knows how much Davey has done to comfort his father. In the film, the Ortiz father and son are played by real-life father-son actors Russell and Tatanka Means, which may have something to do with the fact this relationship is emphasized in the film. Released as an independent film, the Blumes had complete creative control over the movie.  I look forward to seeing it.

The book also does a great job of describing Albuquerque and Santa Fe.  I have never lived there but I have visited several times, and Blume’s description of the scenery is spot-on.  She also describes the balloon races, the shops in Santa Fe, and other areas of New Mexico that clearly demonstrate she has been there. Blume lived in New Mexico for years; she now lives in Florida.

One other thing about this and other “old” tween books I have revisited recently – its relative brevity. So many of these are 200 pages or less, when most new tween and teen novels clock in at 300-400 pages.  There is something to be said for these shorter books – kind of a “less is more” concept – that require the author to really focus the plot and characters without a lot of side trips or descriptions.  In some ways, these shorter books have an honesty to them, because they are so brief.  Only the essential information is included.  Maybe tweens and teens would read more if authors went back to that philosophy that every word must count for something.  Penny Peck, San Jose State SLIS