Originally released in 1988, Company’s Coming is the hilarious picture book about aliens who drop in for dinner at Moe and Shirley’s, and soon the Army has surrounded the house. The alien beings are so gracious that everyone accepts them – a very timely message for the current immigration enforcement 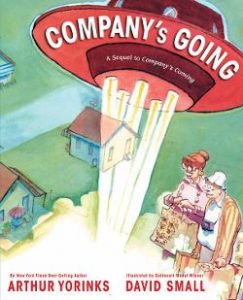 travesties. Yorinks followed up with Company’s Going in 2001, which isn’t quite as successful but many larger libraries will want both books.

The watercolor cartoon artwork lends both the humans and the bug-like aliens a lot of personality. In many ways, adults and older tweens and teens are the best audience for Company’s Coming – they immediately get the message and appreciate the humor. Great for a family read-aloud, libraries may want to purchase these new additions as replacements.

Nonfiction Pop-up, Toy, and Flap Books »
« Do It Yourself Programming: Talk Like a Pirate Day!