Each month we post an annotated bibliography of books that were rated ‘Outstanding’ and nominated for our Distinguished List at our previous month’s meeting.  Members can see full reviews of these books and many more in the July edition of BayViews.  Not a member?  Join, come to our monthly meetings, and hear about these Outstanding books in person!

Drawn Together written by Lê, Minh and illustrated by Santat, Dan; Disney-Hyperion, 2018.

A young boy dreads an afternoon with his grandfather who doesn’t speak English, but the two bond and break down perceived barrios in communication and culture by discovering a shared love of drawing.  (Grades K-3.) 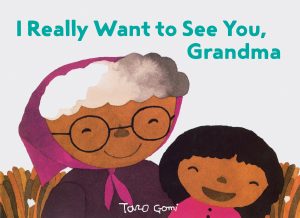 I Really Want to See You, Grandma written and illustrated by Gomi, Taro; Chronicle, 1979/2018.

Taro Gomi’s color sense, familiar brushwork, and masterful control of paint combine to illustrate a gently amusing picture book for preschoolers.  Originally published in Japan in 1979, this first English translation offers a rare blend of coziness and wackiness – do not miss out.  (PreK-K.)

A charming takeoff on The Little Red Hen, this story of Ruby, and her brothers who refuse to help her build a fort out of old boards, has a modern twist.  “‘Not me,’ said Oscar Lee./’I don’t think so,’ said Rodrigo./’No way,’ said José.  ‘I’m too busy.'”  Ruby shows them the error of their ways.  (PreK-2.)

Ground-breaking picture book written in the first-person voice of a young unnamed African-American girl, Mommy’s Khimar explores a little girl’s fascination with her mother’s scarves.  Expertly expands the perception of what it means to be Muslim.  Great for one-on-one reads and storytimes.  (Baby/Toddler-3.)

While others collect rocks or stamps, Jerome, the winsome brown-skinned hero of this story, collects words.  This playful story from the creator of Ish and The Dot works well as a read-aloud for all ages, but it also lends itself to vocabulary-building projects and extension activities.  (PreK-5.) Fox + Chick: The Party: and Other Stories written and illustrated by Ruzzier, Sergio; Chronicle, 2018.

Fox and Chick are unexpected friends who manage to somehow provide both a nostalgic vibe through a pale ink, pen and watercolor palette while using panels for a contemporary graphic novel experience for the new reader.  (PreK-2.)

The Itchy Book written and illustrated by Pham, LeUyen; Disney-Hyperion, 2018.

Five adorable dinosaurs fight the urge to scratch, but is it necessary?  Pham’s cartoon-style darling dinos face a surprise twist in a fun tale for new readers.  (K-2.)

Picture Us in the Light written by Loy Gilbert, Kelly; Disney-Hyperion, 2018.

Kelly Loy Gilbert (Conviction, 2015) has written a richly perceptive and subtle realistic YA novel set in Silicon Valley.  It explores the theme of human connection through Asian American Danny Cheng who starts delving into his immigrant parents’ past.  (9-12.)

Through protagonist Xiomara Batista’s writings from August to March of her sophomore year of high school, The Poet X tells a story of struggle, growth, love, and joy.  Elizabeth Acevedo’s amazing debut novel in verse would make an excellent addition to any public or school library’s YA fiction collection.  (7-12.)

The Serpent’s Secret [Kiranmala and the Kingdom Beyond #1] written by DasGupta, Sayantani and illustrated by To, Vivienne; Scholastic, 2018.

The Serpent’s Secret, the first book in a new series written by Own Voices author Sayantani DasGupta, features an Indian princess drawn into a world inspired by traditional tales of West Bengal.  Filled with adventure, suspense, and romance, this story begins what is sure to be a must-read series.  (4-9.)

Mixed-race Bina must spend the start of summer on her own when her best friend unexpectedly goes away to camp, leaving her to fill the hours and make a new friend.  (5-8.) 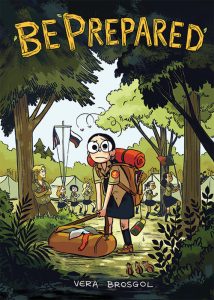 Inspired by the graphic novelist’s own experience, Be Prepared follows eight year old Vera through a tough summer at Russian-American camp as she braves a smelly outhouse, frequent embarrassment, and intimidating older girls.  (4-8.) A complex and compelling graphic autobiography of the author’s time volunteering as an aid worker with the Kurdish resistance in Syria.  The story is comprehensive, including descriptions of local fighters and the political history of the region, but sometimes unsettlingly personal.  (10-Adult.)

Voices in the Air: Poems for Listeners written by Nye, Naomi Shibab; Greenwillow, 2018.

A contemplative, joyful collection of poems mindfulness, travel, and other artists and activists, centered on reminding readers to slow down and appreciate beauty in both the mundane and the extraordinary.  Skews more adult than expected.  (7-Adult.) Six men and two women recount their personal experiences in this history of the war in Vietnam from the U.S. perspective; filled with b&w photos.  (7-12.)

The Triumphant Tale of the House Sparrow written and illustrated by Thornhill, Jan; Groundwood, 2018.

The house sparrow evolved to live alongside humans over 10,000 years ago, when grain was first cultivated, and this informative and fascinating account chronicles the highlights of our interconnected histories over the ensuing millennia.  An excellent choice for nonfiction collections.  (4-6.)

Books of Special Interest: The Little Book of Pooh-isms »
« ACL Meeting this Friday, August 10 in Oakland