Every month, we post an annotated bibliography of books that were rated ‘Outstanding’ and nominated for our Distinguished List at our previous month’s meeting.  Members can see full reviews of these books and many more in the August edition of BayViews.

After a long snooze in the trees, blue giraffe Jelly Bean wakes up to discover a bird nest has been built on her head, so she waits for the eggs to hatch while her friends bring her food, flowers, and entertainment.  Yuly’s playful story of kindness, generosity, and community will delight toddlers and preschoolers with its creative sense of imaginative play.  (Grades Preschool-Kindergarten.)

We Are Shining written by Brooks, Gwendolyn and illustrated by Gilchrist, Jan Spivey;  HarperCollins, 2017.

Fabiola and her mother have been planning their move back to the U.S. for as long as she can remember, but when U.S. immigration officials detain her mother and separate the pair, Fabiola is left to navigate the gritty reality of her new life, including an extended family she barely knows, with only her faith, deeply rooted in Haitian voodoo practices, to guide her.  Zoboi’s thoughtful treatment of mature contemporary topics make the novel a timely addition to public library and secondary school library collections.  (9-Adult.)

Family dynamics in the darkness of grief color Coretta Scott King Award winner Williams-Garcia’s first book featuring a male protagonist.  “Clayton Byrd” is for a more patient reader, with little occurring in the first half beyond his grandfather’s passing.  (3-6.)

The Gentleman’s Guide to Vice and Virtue written by Lee, Mackenzi; Katherine Tegen/HarperCollins, 2017.

Monty, a young English gentleman freshly kicked out of boarding school, is embarking on a “Grand Tour” of 18th century Europe with his sister and best friend (and unrequited love) Percy.  The tour quickly careens into an unexpected adventure involving highwaymen, pirates, alchemy, and romance, throughout which Lee weaves myriad issues such as homosexuality, racism, feminism, and class divisions.  (9-12.) 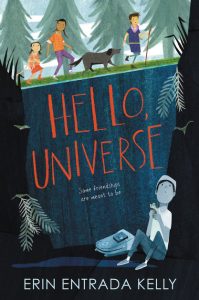 The lives of four middle schoolers converge on the first day of summer, leading to a very mean prank, new friendships, and self-discovery.  As unexpected coincidences bring these characters together, they rely on teamwork while discovering their personal abilities.  (5-8.)

It’s Not Like It’s a Secret written by Sugiura, Misa; HarperTeen/HarperCollins, 2017.

For the first time ever, Sana Kiyohara has a supportive group of Asian friends and maybe-reciprocal flirtation with the dreamiest girl in school, Jamie Ramirez; but she’s also keeping secrets, and as she grows closer to Jamie, she struggles to balance family, friends, and romance.  Sugiura deftly navigates Japanese family dynamics, cultural differences and racism, queer romance, and high school friendships to create an engaging story that reads as compelling, heartfelt, and funny.  (9-12.)

Midnight at the Electric written by Anderson, Jodi Lynn; HarperTeen/HarperCollins, 2017.

The year is 2065, and Adri is staying with a long-lost aunt while she prepares to embark for Mars with a colonization team.  There, she finds a mysterious postcard written to a girl who lived in the house over a hundred years ago, a journal, and letters written by another girl shortly after WWI.  Anderson’s beautiful prose conveys depth of emotion, mystery, and wonder, and readers will be both moved and inspired by this unique story that spans both past and future.  (9-12.)

A string of events threatens to change everything about middle schooler Frost’s comfortable world, beginning with the ban of cell phones at school and a new girl who doesn’t fit in, culminating in a war of words fought via sticky notes.  Anderson creates a realistic and moving picture of four friends who are just trying to do their best to be there for each other amidst a culture of bullying.  (5-8.)

This fifth book in Megan Whalen Turner’s popular Queen’s Thief series is the story of Kamet, a slave in the Mede Empire.  When he becomes the main suspect in his master’s murder, he begins a fugitive’s journey, full of adventure, suspense, and intrigue with an inscrutable Attolian companion.  Turner delivers a high interest adventure with strong, unique characters and thoughtful political intrigue that stands firmly on its own, but is even more satisfying for those who have read the series.  (7-12.)

When a real estate magnate buys their building, twins Tess and Theo, along with neighbor Jaime, travel around an “alternate” New York following clues in a 160-year-old puzzle in an effort to save their home.  This first in a new series is briskly-paced with thoroughly vivid settings to draw one right into the action.  (4-7.)

Around the World in a Bathtub: Bathing All Over the World written by Bradford, Wade and illustrated by Archer, Micha; Charlesbridge, 2017.

Around the world, children battle grownups in the daily ritual know as bath time in this delightful nonfiction picture book.  Collage illustrations combine origami paper, Indian textile stamps, and other materials from around the world with vibrant oil paint to create a textured setting that celebrates the diverse content.  (P-3.)