Every month, we post an annotated bibliography of books that were rated ‘Outstanding’ and nominated for our Distinguished List at our previous month’s meeting. Members can see full reviews of these books and many more in the January edition of BayViews.

Big Snow written and illustrated by Jonathan Bean
Farrar, 2013.
A boy wonders whether it will snow this December day and how much it will snow: this wonderful book traces the day of his watching and checking on the snow.  The pace is fun, the illustrations perfectly matched to the simple (but perfectly chosen) text, and the affection of the family is surely apparent.  Works very well at story time. (Pre-K to Grade 2)

Giving Thanks: Poems, Prayers, and Praise Songs of Thanksgiving by Katherine Paterson; illustrated by Pamela Dalton 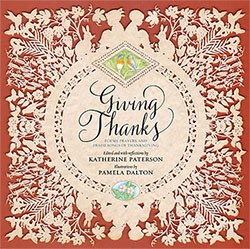 Chronicle, 2013.
In this beautiful book, word and image work together seamlessly to create a true devotional for readers ages 5 and up.  The poems, prayers, and praise songs are chosen from around the world and from ancient to modern times, and they are all simple, direct, and profound.  Illustrations are scherenschnitte, a type of scissor-cut illustration: they are tinted with coffee, which give them a warm feeling and tone: they are also painted in watercolor. (Kindergarten – Adult)

Henry’s Map written and illustrated by David Elliot
Philomel/Penguin. 2013.
Living by the motto “A place for everything and everything in its place,” Henry the pig notices that the farmyard is a disorganized mess, so he walks around the farm drawing up a map so that everyone will know where everything is.  Animated dialogue, along with the Winnie the Pooh-ish sense of wonder and naiveté of the farm animals, makes this a storytime-worthy charmer. (Pre-K – Grade 1)

Candlewick, 2013.
In a sweeping wordless debut, Becker carries readers away with his protagonist, a lonely young girl who escapes to a magical world. Becker’s watercolor shading creates depth and warmth with a light touch, while his pen and ink drawings are full of architectural and technological details that invite repeated readings. (PreK – Grade 3)

Mr. Tiger Goes Wild written and illustrated by Peter Brown
Little, 2013.
Unsatisfied with “the ways things were” in the city, Mr. Tiger searches for his true nature in the wilderness, but becomes lonely.  A succinct, understated narrative lets the droll, subtle art tell most of this silly self-discovery story. (PreK- Grade 3)

Train written and illustrated by Elisha Cooper
Orchard/Scholastic, 2013.
Five different trains carry passengers and freight across the U.S., passing through cities, prairies, and mountains, arriving at last in San Francisco.  Elegant, realistic watercolor and pencil art capture the bustle of railway stations, the diversity of U.S. landscapes, and the excitement of train travel in this inspired cross-country journey. (PreK – Grade 4)

How to Catch a Bogle by Catherine Jinks; illustrated by Sarah Watts

Houghton, 2013.
Ten-year-old Birdie’s dangerous job of helping to catch child-eating boglers becomes even more exciting as criminals and a mad scientist wade in. Jinks’ fine writing is a wonderful mix of nonstop adventure and a vividly-alive 1870s London, teeming with sights, sounds and smells, amazing characters and constant danger. (Grades 4 – 6)

Call of the Klondike: A True Gold Rush Adventure by David Meissner and Kim Richardson

Caulkins/Highlights, 2013.
Stanley Pierce and Marshall Bond ventured to the Klondike in 1897 to find gold.  Their letters, photos, and newspaper clippings provide excellent background.  Appended material, including a map, is a valuable plus. (Grades 5 – 9)

Locomotive written and illustrated by Brian Floca
Atheneum/Simon & Schuster, 2013.
A young mother and her children journeys on the newly completed Transcontinental Railroad in 1869, traveling from Omaha to Sacramento. This oversized nonfiction picture book fills its pages with expansive views, looming engines and intricate details. But the compelling rhythm of the free verse text and the variety of lines, perspectives and scenery keeps the pacing moving forward, even if the journey seems long at time. (PreK – Grade 5)

The Nazi Hunters: How a Team of Spies and Survivors Captured the World’s Most Notorious Nazi by Neal Bascomb

Levine/Scholastic, 2013.
Combining meticulous research with an easy to read narrative style, Neal Bascomb has created a thrilling true tale of the hunting down, capture and trial of Adolf Eichmann, the Nazi responsible for the transportation of millions of Jews to the concentration camps. (Grades 7 – 10)

The Tree Lady: the True Story of How One Tree-Loving Woman Changed a City Forever by H. Joseph Hopkins; illustrated by Jill McElmurry
Beach Lane/Somon & Schuster, 2013.
A handsome picturebook-biography introduces the indomitable Californian Kate Sessions, the gardener who promoted the cultivation of trees in San Diego, and became known as the “Mother of Balboa Park.”(Kindergarten – Grade 4)

21st Century/Lerner, 2013.
With a dynamic, photo-filled book design and an interesting text that uses anecdotal evidence to set the scene, this timely look at how wild animals and urban and suburban life are in conflict is an exemplary informational book. Featuring color photos, sidebars, a map, and page decorations that resemble animal footprints. (Grades 4 – 8)