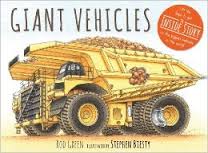 Illustrator Stephen Biesty is respected for his many factual books, including The Story of Buildings (Candlewick, 2014) and Into the Unknown (2011). His newest is not in that league but will be enjoyed by children who are fascinated with giant machinery and vehicles.
Nine machines are featured, including a cruise ship, helicopter, submarine, train, jet, and dump truck. Each spread focuses on one vehicle, drawn in detail with colored pencil and featuring several small captions with facts. Each vehicle has three of four small flaps that open to show something on the interior of the machine, with a brief caption.
The flaps are quite sturdy and it has board pages, so this will hold up to library usage. But the information is quite minimal (not enough for a report), so this is really for browsers. Readers who enjoy Eyewitness books will like this but it is not an essential purchase. 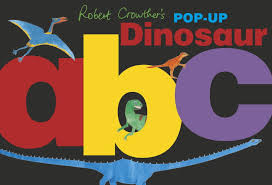 Straight-forward in presentation, this ABC of dinosaurs will certainly be popular although it may not stand up to library circulation. It begins with each letter as a flap (in various colors) – lift the flap and see the dino with a few sentences on what makes it distinctive. The letter appears in the upper case, with a smaller lower case letter set onto the capital letter. A few of the flaps slide, but most open up to a color dinosaur.
The smallish dinos are depicted fairly realistically but in a variety of bright colors (not all lizard-y green), and a few have comical facial expressions. For the most part, children under the age of ten will grasp both the facts, and get a strong impression of what the dinosaur possibly looked like.
Because the pop-ups and illustrations are relatively small, there could be some factual misinterpretations. The T-Rex is standing upright when newer research indicates that may have been unlikely, and the carnivore Guanlong is seen eating grass.
The final page gives silhouettes of the dinos along with a human, just to show the scale of their sizes. It also contains a very brief glossary of relevant words such as herbivore, and a brief description of the three eras (Triassic, Jurassic, and Cretaceous).
Overall, this is sure to be popular and could even be useful for brief dinosaur reports. If your library has a collection of popup books for “in house” use, this would be a find purchase.

In this board books with flaps, a “pout pout” fish is looking for other ocean friends. The rhyming text has four lines per page, describing Pout-Pout’s journey. In some cases the other creatures are referred to accurately, including the shark, lobster, puffer fish, squid, and more, but sometimes they receive nicknames. For example, the octopus is called “Mr. Eight,” another is called “Miss Shimmer;” and the change is not to facilitate a rhyme so that seems pointless.
The soft illustrations appear to be created in watercolors and colored pencil, and depict fairly realistic sea creatures except for their cartoon eyes and mouths. Unfortunately, the thin cardstock of the flaps make them difficult for little fingers to open, and they are likely to be torn off quite easily. Most libraries can skip this.

Five semi-trucks are the featured element of this engaging board book that will appeal to a wide age range. Toddlers will like the trucks and older children can read the brief text. The full color cartoonish illustrations do a great job of depicting factual elements, such as engines, gas tanks, and tools.
Each truck has a theme – delivering food from a dairy, taking animals for a petting zoo, bringing in a carnival, taking sea creatures to a pet store, and transporting new cars to the dealership. Each truck has several small flaps that open to show what is being hauled, as well as parts of the truck itself. There is at least one driver of color, and one female driver; unfortunately she asks the read to look for her “bag,” which is a pink purse under her seat.
The text consists of one sentence describing each truck and one question asked of the reader – can you find the gas tank or the engine? Under each flap is a picture and another question, urging the reader to identify what is being shown, to count items, etc. This offers a great deal of interaction and will encourage multiple readings.