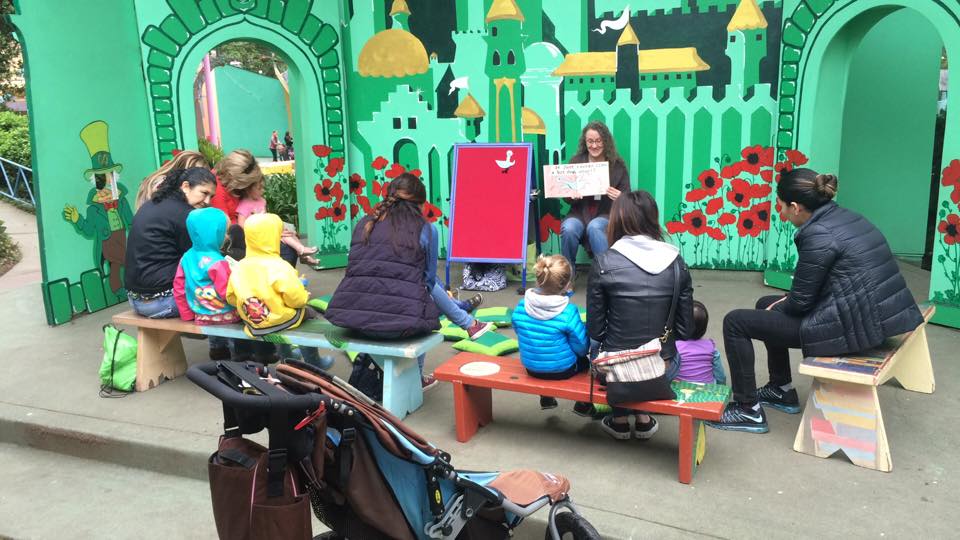 Join Fairyland for a celebration of children’s books and their creators. Enjoy read-alouds, art demonstrations, and the chance to meet more than 25 local authors and illustrators, including Lisa Brown, Marcus Ewert, Kathryn Otoshi, Aya de Leon, Elisa Kleven, Muon Van, and Annie Barrows. Buy featured books at the Laurel Book Store table and have them signed in person. Also: Children can flex their creativity by contributing to the Oakland Public Library’s one-of-a-kind pop-up library of kid-made books!

The Eric Carle Museum of Picture Book Art has announced the recipients of its 2016 Carle Honors.

Allen Say was named the Artist Honoree. Born in Japan, Say moved to the U.S. as a teenager, and studied both Japanese and Western art styles. After a successful career in photography, he came to children’s books at the age of 53, the themes of which often encompass bicultural experience.

Regina Hayes was named the Mentor Honoree. Hayes was the head of Viking Children’s Books for 30 years and is now editor-at-large. During her tenure, she has worked with such picture book luminaries as Barbara Cooney, James Marshall, Simms Taback, Jon Scieszka and Lane Smith, John Bemelmans Marciano and Sophie Blackall, and Rosemary Wells.

Steven Heller was named the Bridge Honoree. A graphic designer and illustrator, Heller Heller is co-chair of the School of Visual Arts MFA Design/Designer as Author + Entrepreneur program.

Lee & Low Books was chosen as the Angel Honoree. The largest multicultural children’s book publisher in the U.S., Lee & Low is dedicated to artists and authors who offer both mirrors and windows to young readers, and celebrates its 25th anniversary this year.

The 11th Annual Carle Honors will be awarded in New York City on Wednesday, September 28, presented by Gregory Maguire. For more information, www.publishersweekly.com/pw/by-topic/childrens/childrens-industry-news/article/69688-2016-carle-honorees-announced.html?utm_source=Publishers+Weekly&utm_campaign=65f9f77733-UA-15906914-1&utm_medium=email&utm_term=0_0bb2959cbb-65f9f77733-304449365.