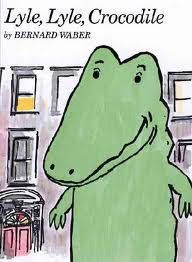 Children’s author-illustrator Bernard Waber, creator of much-loved picture books about Lyle the crocodile and other anthropomorphic animals, died on May 16, 2013. He was 88. Waber was born in Philadelphia on September 27, 1924; though he enjoyed drawing when he was a child, he didn’t consider an art career early on. After serving in World War II, he went back to college switching his major from finance to art. Various magazine art directors suggested to Waber that some of his drawings might be right for children’s books, a vote of confidence that spurred him to mail some samples to publishers.

Houghton Mifflin published his first book, Lorenzo, about a curious fish, in 1961. Waber has said that his fondness for New York and for his and Ethel’s first home in that city inspired The House on East 88th Street (1962), the book in which Lyle, the popular crocodile, is discovered in the Primm family’s bathtub. In addition, Waber shared in various interviews that reading aloud to his own three children, and accompanying them to the children’s room at the library, were other catalysts for his immersion in the world of children’s literature. Another favorite is Ira Sleeps Over, published in 1972.

Waber suffered from macular degeneration later in his career and had been unable to draw for several years due to the eye disorder. But in 2010 Waber collaborated with his daughter Paulis, also an artist, to create Lyle Walks the Dogs, in which Lyle masters a new job: dog walker. The elder Waber frequently described Lyle’s features and feelings to Paulis and was able to see her artwork through magnifying equipment during the book-making process, according to Houghton Mifflin.