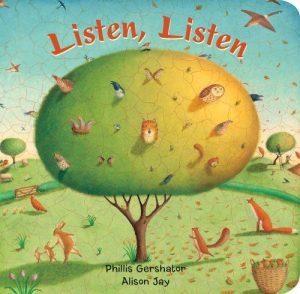 Although seasons are covered in Kindergarten, preschoolers can also appreciate the seasons and how the weather is different at various times in the year, and they also enjoy holidays. For a craft project, leaf rubbings are really easy to do. For a more involved art project, glue popped popcorn to a drawing of tree branches to look like apple blossoms. For more ideas, go here.

Deady, Kathleen.  ALL YEAR ROUND.   A rhyming celebration of the seasons.

Tafuri, Nancy.  SNOWY FLOWY BLOWY.   In this very simple book even infants and toddlers will enjoy, a farm family goes through the year and sees the changing seasons.

Roseberry, Vera.  RUN, JUMP, WHIZ, SPLASH.   The sights and sounds of each season are described in this simple story.

Howell, Will.  I CALL IT SKY.   Children are seen playing throughout all four seasons.

Weiss, Nikki.  ON A HOT, HOT DAY.   A mother and young child, who appear to be African-American or Latino, show how the seasons change in their city home.

Rucki, Ani.  WHEN THE EARTH WAKES.   Bears help the Earth experience each season.

Derby, Sally.  MY STEPS.   One of the few season stories with an African-American main character, a girl describes how she sees the seasons from her front steps.

Borden, Louise.  CAPS, HATS, SOCKS, AND MITTENS.   With Lillian Hoban’s expressive watercolor cartoon characters, children show how they dress and what holidays they celebrate in each season. Also available as a Big Book.

Lotz, Karen.  CAN’T SIT STILL.   A child shows how to play in each season, no matter what the weather is.

Lionni, Leo.  FREDERICK.   While the other mice collect food for winter, Frederick observes and appreciates the seasons so he can tell stories later.

Martin, Bill.  THE TURNING OF THE YEAR.   Beautiful oil paintings illustrate a rhyming text, that describes each month and the seaons.

Birnbaum, Abe.  GREEN EYES.   A small white kitten is the focus of this story, which covers the seasons.

Rohmann, Eric.  A KITTEN TALE.   Four kittens are shown in the various seasons as they wait to experience their first snowfall.