There are several great picture books about personal names. This would be a great theme for the first week of school, or for a new series of storytimes in late summer when the older children go off to school. You may want each child to wear a nametag, to help you learn their names – this can even be one of the crafts. Many children’s songs help with the “name” concept: “B-I-N-G-O,” “Mary Wore Her Red Dress,” “John Jacob Jingleheimer Schmidt,” “The Name Game (Banana-Fana Fo Fana),” and “Aikendrum.” 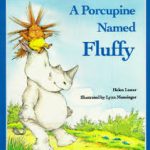 Lester, Helen. A PORCUPINE NAMED FLUFFY. Fluffy doesn’t live up to his name, but realizes it could be worse when he befriends a rhino named Hippo!

Peek, Merle. MARY WORE HER RED DRESS. A picture book based on the popular folksong; adapt it to the names of kids at your storyhour.

Slate, Joseph. MISS BINDERGARTEN GETS READY FOR KINDERGARTEN. A great alphabet book that incorporates the names of 26 kids, and works as a story about the first day of school.

Mosel, Arlene. TIKKI TIKKI TEMBO. A longtime storytime favorite that is available in a Big Book edition. Eldest son’s long name is so difficult to say it can be hazardous.

Henkes, Kevin. CHRYSANTHEMUM. She always loved her name until the kids at school make fun of it.

Daly, Niki. THE BOY ON THE BEACH. The lifeguard helps a lost boy find his parents, when the boy spells out his name in the sand.

Dylan, Bob. MAN GAVE NAMES TO ALL THE ANIMALS. The lyrics of the song are illustrated with colorful cartoons.

Engel, Diana. JOSEPHINA HATES HER NAME. Wishing she had a short name like friends Amy and Sarah, her mother explains how she is named after a long-lost aunt.