Even young preschoolers can relate to stories about mothers, even if they are raised by a grandparent or single father, because they probably have an influential female in their lives. There are several picture books that are popular for a “Mother’s Day” storytime. A simple craft activity could involve making Mother’s Day cards. Another popular craft are paper flowers. An easy version of a paper flower uses cupcake papers, purchased from the grocery store. Then glue the paper to a pipe cleaner or a green paper “stem,” and it looks like a daffodil. You can also make llama stick puppets, to go along with Is Your Mama A Llama? Make a simple llama outline drawing, and glue cotton balls to act as the fur. Cut out the llama and tape to a craft stick. 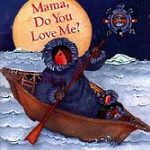 Guardino, Debbie. IS YOUR MAMA A LLAMA?    A rhyming, humorous text invites audience participation in this story of animal mothers.

Flack, Marjorie. ASK MR. BEAR.    In this classic, a young boy asks several animals their advice as to what he should give his mother for a birthday gift.

Scott, Ann H. ON MOTHER’S LAP.    The audience will rock back and forth along with the characters in this story, which depicts a native Alaskan family.

Christelow, Eileen. FIVE LITTLE MONKEYS JUMPING ON THE BED.    Wait for the surprise ending, where Mother is jumping on the bed!

Smalls-Victor, Irene. JONATHAN AND HIS MOMMY.    Get everyone on their feet to follow along with the characters as they walk, jump, and dance down the street, in this story depicting an African-American mother and son.

Joosse, Barbara. MAMA, DO YOU LOVE ME?    In this story of an Inuit mother and daughter, the girl will try her mother’s patience but not test her love.