In honor of Maurice Sendak’s beloved Where the Wild Things Are, let’s have a storytime about monsters. A few parents may wonder if this will frighten their preschooler, when we know these monster stories actually work to alleviate fears about monsters. A fun craft that costs next to nothing is a Monster paperbag puppet. I base mine on Emberley’s Go Away Big Green Monster, which has diecuts in the pages, representing the monsters face. I just traced the diecut monster face (because I can’t draw to save my life), and Xeroxed the tracing. We glued the mouth and teeth to the underside of the bag’s flap, and glued the eyes, nose and hair to the top flap, and had a great paperbag puppet that really looked like the monster in the book. Here are some of my favorite “monster” stories that will chase away nightmares: 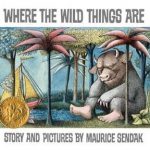 Emberley, Ed. GO AWAY, BIG GREEN MONSTER! Kids will shout out the “Go away” to each part of the monster’s face – a fun, interactive storytime favorite.

Hutchins, Pat. THE VERY WORST MONSTER. Hazel Monster, sister to baby Billy Monster, describes how she can be more monsterous than the new baby.

Mayer, Mercer. THERE’S A MONSTER IN MY CLOSET. Another storytime classic, about a boy who has to console the frightened monster. The boy has a toy gun which some parents may want to avoid.

Miranda, Anne. MONSTER MATH. A brief, rhyming story to help us count the monsters. No numerals are shown, just the word for the number and the monsters to be counted.

O’Keefe, Susan. ONE HUNGRY MONSTER. A funny, rhyming counting story that ends in a food fight worthy of the Three Stooges.

Sendak, Maurice. WHERE THE WILD THINGS ARE. The classic tale, available in Spanish, Chinese, and as a book on tape.

Willis, Jeanne. THE MONSTER BED. Dennis the monster is afraid to go to bed; maybe there are humans under the bed! Look closely for the stuffed animal that resembles one of Sendak’s Wild Things, at the foot of Dennis’s bed.

Winthrop, Elizabeth. MAGGIE AND THE MONSTER. One of the few picture books that show a monster who is a girl.