Let’s celebrate a common insect we all have seen – the fly! For a craft activity, how about a fly mask, made with egg cartons for the fly’s big eyes. Or, try this cute frog catching a fly with its tongue, which is a perfect accompaniment to the song Five Green and Speckled Frogs. Those titles marked T will be suitable for a Toddler Storytime as well as the traditional preschool storytime. 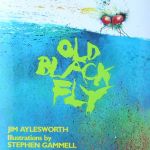 Taback, Simms. THERE WAS AN OLD LADY WHO SWALLOWED A FLY. T The traditional song done with brightly colored, die-cut illustrations.

Oppenheim, Joanne. YOU CAN’T CATCH ME! T A fly challenges several animals to catch him; the storytime crowd will chant the repeated phrases.

Kennedy, Kim. FRANKENFROG. After creating an enormous fly, the scientist needs to create an equally large frog to catch it!

Faulkner, Keith. THE WIDE MOUTH FROG. T In this pop up book, a frog asks various animals what they eat, volunteering that he eats flies.

Arnold, Tedd. HI, FLY GUY. Buzz captures a fly so he can enter the pet show. This is the first in a series of easy readers, and all are brief enough to read at a storytime.

Trapani, Iza. SHOO FLY. T Everyone will be singing Shoo fly, don’t bother me! when you read this book version of the folksong.

Howitt, Mary. THE SPIDER AND THE FLY. Droll illustrations depict the Victorian-era poem in this Caldecott Honor book best suited to older preschoolers and school-age children.