Thanks to Pam Carlson from the Long Beach Public Library, CA

Make copies of some clip art bugs, then decorate with gold glitter to make Fireflies. Make a mobile based on Eric Carle’s THE VERY LONELY FIREFLY, by making copies of a lantern, light bulb, candle, and car headlights as well as a bug, then cut them out and attach to strings hanging from a clothes hanger. Or, do a Lightning Bug game with a flashlight – the kids try to pounce on the light from a flashlight. Lead a sing-along to the songs Firefly by Tony Bennett, and Glow Little Glow-worm by the Mills Brothers. Those titles marked T will be suitable for a Toddler Storytime as well as the traditional preschool storytime. 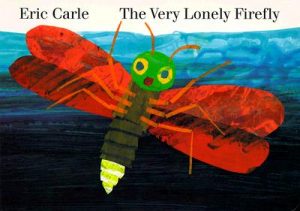 Carle, Eric. THE VERY LONELY FIREFLY. T One night, a lonely firefly goes out in search of other fireflies.

Eastman, P.D. SAM AND THE FIREFLY. Sam the owl befriends a firefly in this classic easy reader.

Burke, Katie. LIGHTNING BUG THUNDER. Three friends have a lightning bug in a jar, hoping the lightning attracts thunder during a drought.

London, Jonathan. FIREFLIES, FIREFLIES, LIGHT MY WAY. T In this chant celebrating nature, the repeated phrase Lead me to the place will engage even young listeners.

Waber, Bernard. A FIREFLY NAMED TORCHY. Unlike his usual Lyle Crocodile cartoon illustrations, Waber has illustrated this story with fingerpaints. Torchy’s light is so bright it disturbs the other forest creatures.