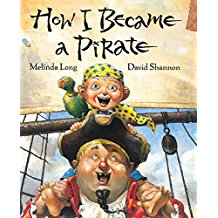 Even preschoolers can enjoy “Talk Like a Pirate Day” in September with a Pirate-themed storytime. For a craft project, make paper plate pirate masks, as seen here:  www.dltk-kids.com/crafts/pirates/mplatepirate.htm .

Freedman, Claire. Pirates Love Underpants.  The captain is searching for underpants of gold in this rhyming story.

Kennedy, Kim. Pirate Pete: Talk Like a Pirate.  In this rhyming story, Pirate Pete explains what he is looking for in the pirates for his crew.

Long, Melinda, How I Became a Pirate. A boy has fun with the pirate crew he meets on the beach, but at bedtime he wants to go home to hear a story.

McPhail, David. Edward and the Pirates. Edward loves books and reading, and soon he meets up with pirates similar to those he has read about.

Peet, Mal. The Treasure of Pirate Frank. A boy and his dog search for pirate treasure.

Spires, Ashley. Small Saul. As the smallest on the ship, Saul must prove he is a worthy pirate.

Sturges, Philemon. This Little Pirate. Two bands of pirates fight over a box, but decide to open it together.

Tucker, Kathy. Do Pirates Take Baths? A fun rhyming story about the qualities of a pirate.