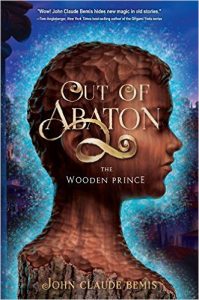 The fairytale of Pinocchio, the puppet who becomes a boy, is thrillingly twisted in John Claude Bemis’s charming middle grade fantasy. Plot elements familiar from the original Carlo Collodi story (and the Disney movie)—the puppet show, being swallowed by a whale, Pinocchio’s nose growing—are transformed. As Pinocchio embarks on a quest to find his father, Geppetto, he is accompanied by familiar characters, now more fully fleshed out: Mezmer, a vixen, and Sop, a cat, as well as Maestro, a persnickety cricket. Bringing some girl power to the team is blue-haired Princess Lazuli, daughter of Prester John, the immortal ruler of Abaton, a mystical land that’s the source of all magic brought to the human world. The intriguingly inventive, steampunky Venetian Empire setting is developed over the course of the story and, more fully, in a glossary at the back. Pursued by the forces of the wicked Doge, Pinocchio finds that love, friendship, and loyalty are what transforms him from wood to flesh. Though a satisfyingly complete story in itself, this is the first part of a series, and readers will be excited by what’s to come once Bemis leaves the source story behind.