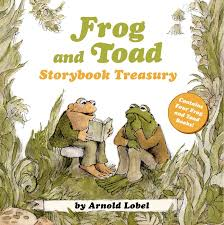 Often these compilation volumes don’t really work, but this may be the exception that proves the rule. Containing the four original “Frog and Toad” beginning reader books, this volume has a lovely book design that gives it lots of space. For example, this volume is square, which allows for wide decorative boarders on the outside of every page. This also means there is a wide inner white space, which prevents any of the text to be in the ‘gutter,’ which is very helpful for the emergent reader. The other major plus is that these are not changed or abridged in any way – the full text and all the illustrations appear here, exactly as they did in the originals.  These wonderful stories are a rite of passage for most second graders; once they master these, they often move on to chapter books. Both the narratives and the illustrations are exemplary – in fact, Frog and Toad are Friends received a Caldecott Honor, and Frog and Toad Together received a Newbery Honor – the only book series to win such dual recognition.   The “Frog and Toad” books are on nearly every list of best books for children, and have been turned into a Tony Award-nominated Broadway musical. In 2012, the Jim Henson Company (home to The Muppets), optioned the rights for an animated feature film.   At 12 dollars, this is one way to have all four books for just three dollars each, making this an excellent choice for a gift, or for very small libraries that can’t offer all four books in multiple copies.

Herman Parish, nephew of “Amelia Bedelia” creator Peggy Parish, has written a series of books depicting the housemaid as a young girl. She exhibits the characteristic of misinterpreting idioms and sayings, just like she did in the original books, which is a source of humor. This compilation puts together two picture books and three easy readers that feature the young Amelia.  The book design is square, with a wide border on the outside edge. Unfortunately, in this case the inside edge doesn’t have a border, so there are times the text is set too close to the ‘gutter.’  This could be a problem for the emergent reader who may have difficulty seeing the text that is dipping into the binding.   The stories focus on Amelia’s first day of school, field trips to a farm and to the forest, meeting a new neighbor, and going to a slumber party. All of these cover events that emergent readers can relate to, and the full color cartoon-style illustrations add a lot of personality to the characters. This is better as a gift book; libraries would be better off purchasing the five books individually.