The January 2014 BayNews (the newsletter for the Association of Children’s Librarians of Northern California) is now available on our website: http://www.bayviews.org/baynews.html . You will find our column on Pop-up books, news, read-alikes, and other stories.  Three new Storytime outlines have also been posted, continuing our topics for the upcoming 2014 summer reading themes “Paws to Read,” and “Fizz Boom Read!”  Thanks!

These pages have been updated:

Review of the Week 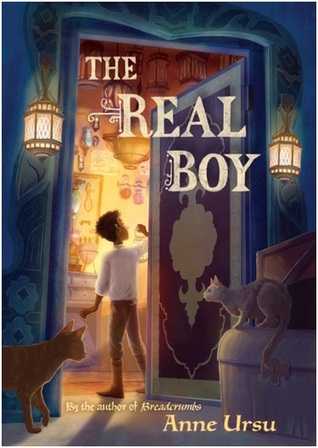 Following Breadcrumbs (2011), which re-worked the folktale The Snow Queen, Anne Ursu now riffs on Pinocchio (Adventures of Pinocchio, Collodi, 1883) in this middle grade fantasy, although not in an expected way. Oscar is the servant of Caleb, the only magician left on the magic-soaked island of Aletheia. He has only known a solitary and routine existence, but when Caleb vanishes, Oscar is pushed into the public world, which pressures him in ways that he cannot articulate. Oscar’s inability to read faces or comprehend emotions, and his lack of social skills, put him somewhere on the autism spectrum. As his new friendship with Callie, a kind and pragmatic healer’s apprentice, grows, his efforts to understand and express his feelings are heart-twistingly well-written. Oscar and Callie investigate as Aletheian children fall inexplicably ill, and a monster terrorizes the island, raising ideas which resonate with the real world of today: history is rewritten to suit the victors, a society accepts the divide between the haves and the have-nots, and the consequences of individual greed on the community and the future are explored. Though there are some questions left unanswered, The Real Boy is raised far above typical middle grade fantasy by both the character development of Oscar and the sophistication of the themes explored.