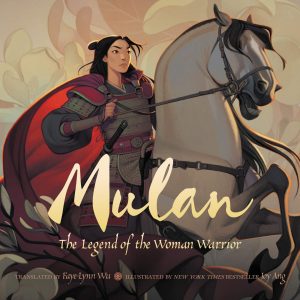 China is at war, and each family must send their men to defend the country, but Mulan’s father is too old, and her brother is still a child. In order to keep her family safe, Mulan decides to serve in their place. Her father says she’s not strong enough because she’s a girl, but Mulan insists and disguises herself in her fa­ther’s armor. Mulan is a fierce, courageous, and kind-hearted heroine who perseveres through 12 hard years of fighting not only a war, but also against her society’s gender norms. Joy Ang’s richly detailed illustrations are a modern-day interpre­tation of historical Chinese paintings. The majority of the il­lustrations are in dark and neutral colors, and deep reds help intensify the war scenes, most of which focus on Mulan, her fellow troops, and the harsh conditions they face. While this depiction of Mulan vaguely resembles the character from the Disney animated feature film, this book is not a retelling of it. The fantastical and romantic elements have been removed, and instead young readers are introduced to this new translation of the traditional Chinese poem The Ballad of Mulan. Mulan: The Legend of The Woman Warrior is sure to empower young read­ers of any gender and would be a wonderful addition to a cul­turally-themed storytime or to read alongside books featuring strong female heroines. Back matter includes the full version of the poem in Chinese script.

Suggested Reading Review »
« Other Half of Happy Review