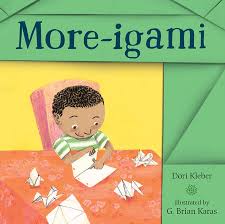 Joey, who appears to be African American, learns about origami from a classmate’s mom when Mrs. Takimoto demonstrates how to fold a paper crane for the class. After much “practice and patience,” as well as encouragement from restaurant owner Mr. Lopez, Joey becomes adept at origami, even making fancy folded napkins for the restaurant. The message about practicing a skill is welcome, as is the multicultural cast of characters, and will inspire many to try origami (there is a simple ladybug diagram at the end to get started). Karas’s colorful cartoon gouache artwork features his usual pencil detailing, and the characters’ facial expressions clearly depict the emotions being felt, such as frustration. Give this charming debut picture book to primary grade teachers as a natural match for a class art project.

Anything But Ordinary Addie Review »
« Our Food: A Healthy Serving of Science and Poems Review