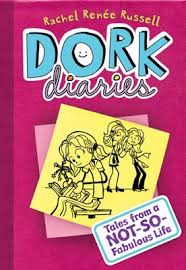 The latest in the “Dork Diaries” series, number 11, will be released on October 18, 2016. These diary-like books feature lots of cartoon ink drawings, similar to Jeff Kinney’s “Diary of a Wimpy Kid” series. But “Dork Diaries” features a female protagonist, which is refreshing since most novels with cartoon drawings highlight a male leading character.

Cabot, Meg. From the Notebooks of a Middle School Princess.

Calonita, Jen. I’m with the Band.

Holm, Jennifer. Sunny Side Up.

Tashjian, Janet. My Life as a… series.

Young, Karen Romano. Stuck in the Middle (of Middle School: A Novel in Doodles.