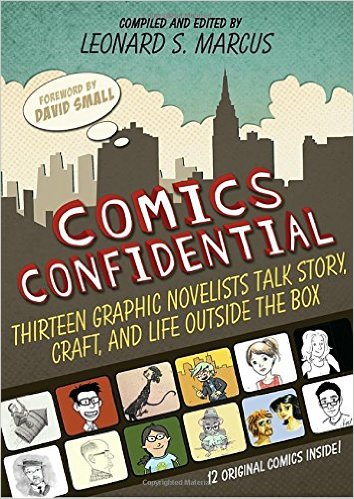 Leonard Marcus has conducted interviews with 13 graphic novel creators, where they describe their childhoods, what led them to this profession, and their creative/work process.  Librarians and teen graphic novel fans will find this a fascinating look at a book format growing in popularity.

After a brief forward by author/illustrator David Small, and an introduction by Marcus, the interviews begin in a straightforward question-answer format. Arranged alphabetically by last name, the authors represent several different cultures although all of them currently work in the United States. Kazu Kibuishi is from Japan, Càtia Chien is from Brazil, and Siena Cherson Siegel is from Puerto Rico.  The Bay Area is represented by Gene Yang and Geoffrey Hayes.  The rest are from the U.S.

Each interview begins with a self-portrait by the author, which gives an insight into their personalities. The other linking visual feature is that each was asked by Marcus to create a one-page cartoon on the theme of “the city.” Often rough sketches are also included.

Many of the authors were inspired by Art Spiegelman’s Maus, and most say they were not into superhero comics in their youth. Instead, many preferred other types of comic books and manga. Also, many have similar ways of working, from the intense process of creating the story, to the workmanlike endeavor of completing the artwork and coloring.

Tween and teen readers may be inspired when they discover that many of these author/artists were good students, who self-identify as nerds, and that many were supported by their parents in following the path to a career in the arts. Nearly all of them went to college, sometimes majoring in something other than art, such as computer science or film-making.

Although this is not essential professional reading for those who do collection development of graphic novels, this is a delightful look at the creators of these special books. Most of the interviews sound like conversations, so this is great to read when you want to relax. Buy for the YA shelves but librarians will want to check it out for themselves.