Each month we post an annotated bibliography of books that were rated ‘Outstanding’ and nominated for our Distinguished List at our previous month’s meeting.  Members can see full reviews of these books and many more in the September edition of BayViews.  Not a member?  Join, come to our monthly meetings, and hear about these Outstanding books in person!

A young bear and wolf take a quiet, amicable walk in the snowy woods.  (Grades PreK-2.) Little Star cannot resist the mooncake her mother has made.  (PreK-2.)

A colorful celebration of the vowel pattern, double-“0”.  (PreK-1.)

A Most Unusual Day written by Mallery, Sydra and illustrated by Goodale, E.B.; Greenwillow/HarperCollins, 2018.

Mixed-race Caroline knows that the day will be unusual, as a new baby sister is due to arrive.  The combination of lyrical language, stunning illustrations, and acknowledgement of the anxiety of a child who is soon to get a sibling makes this one of the more exemplary books on adoption to date.  (K-2.)

A preschooler is delighted with the process of buying new shoes.  (PreK-2.)

Finn builds a boat out of scrap in honor of his grandfather and sets out to say goodbye to him in this Sendak-esque tale.  (PreK-2.)

Magdalys Roca lives in an orphanage until it burns during Civil War-era race riots in New York, so she and her friends use dinosaurs as transportation to help others protect the black community.  (3-7.) 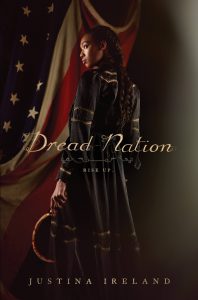 When the dead start rising up from Civil War battlefields slaves are forced to become zombie killers.  Jane, a talented trainee, uses her wits and skills against humans and zombies when helping find a missing family.  Strong characters and a creepy, powerful narrative make this an exciting read.  (7-12.)

Mia Tang staff the front desk of an Anaheim motel managed by her Chinese immigrant parents.  Issues of poverty and discrimination are skillfully woven into an engaging narrative featuring a resourceful and likeable heroine, well-drawn secondary characters, and an uplifting conclusion.  (4-6.)

A diverse special education class of fifth and sixth graders in Brooklyn struggles to voice their personal stories.  Newbery Honor winner Woodson draws on current events and social issues to weave a compelling tale of tweens trying to make sense of the world in which they reside.  (4-5.)

Guided by a spirit, 11 year-old Nolitye must find the pieces of a magical stone in order to stop the evil that has taken hold of her township, Phola.  Vibrant characters and inventive plot twists will grip readers as the relish in magical realism woven with folklore and township life.  (5-Adult.)

After a five year hiatus, Ivy + Bean are back seeking a sister to save Ivy from the fate of being a spoiled only child.  Blackall’s intricate Chinese ink illustrations add to the fun.  (K-2.)

Claudia’s best friend Monday is missing and Claudia seems to be the only one who cares.  As the truth is slowly revealed in the complex, well-crafted story, we confront how race and class affect attention paid to issues involving young girls of color and their mental health.  (8-12.)

The Parker Inheritance written by Johnson, Varian; Arthur A. Levine/Scholastic, 2018.

Candice Miller, granddaughter of the first female, first African American city manager for Lambert, South Carolina, knows her grandmother was dismissed for digging up city tennis courts in search of buried treasure.  This compelling story will touch the hearts of readers and broaden understanding.  (5-9.) Willa of the Wood written by Beatty, Robert; Disney/Hyperion, 2018.

Willa is a young night-spirit who is thrust out of her forest clan and learns whether all humans are as evil as she was taught.  Beautiful language and setting complement the story of a remarkable and memorable character.  (4-8.) 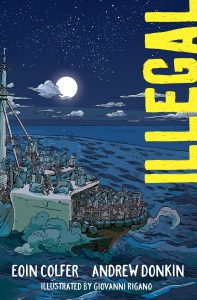 Two brothers attempt to make the harrowing journey across the sea from North Africa to better opportunities in Europe.  Ebo and his companions give a human face to the plight of refugees, making the stakes feel real in the dangerous circumstances they encounter.  An important, timely story.  (5-9.) 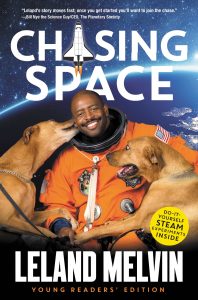 African American Melvin Leland is the only person to have been both drafted into the National Football League and to have flown into space (International Space Station).  Fascinating descriptions of NASA provide more detail than most children’s books about astronauts, yet the text is accessible.  (4-8.) Describes the winter of 2013-2014 “irruption” – a migration far outside a species’ usual range – of Snowy owls.  This led to Project SNOWstorm, the banding of snowy owls, and the attaching of GPS transmitters to some.  Analysis of the tracking produced “groundbreaking” round-trip documentation.  (3-6.)

This beautifully decorated picture book biography details the life of the man who followed the concepts of compassion, moral behavior, and righteousness.  Confucius believed that “Practicing shu [i.e. compassion or open-heartedness] with others would create a peaceful and harmonious world.”  (3-6.)