Every month, we post an annotated bibliography of books that were rated ‘Outstanding’ and nominated for our Distinguished List at our previous month’s meeting. Members can see full reviews of these books and many more in the April edition of BayViews.

In this joyful board book, children describe what fills their hearts with happiness, including walking barefoot on grass and listening to stories. It is in Flett’s deeply colored illustrations where we see the First Nations people, not the text, showing a costumed girl dancing, a boy sitting on his father’s lap while the father drums, and other things that indicate the community being celebrated. (B/T-K)

When her father runs off with a dental hygienist, Raymie plans to enter and win the Little Miss Central Tire competition so her father will see her picture in the paper, realize his mistake, and come home. Also entering the contest are Louisiana, who needs the prize money, and Beverly, who plans to sabotage the event. Slowly learning to trust each other as their stories are revealed, the girls embark on an adventure to rescue a lost cat and end up saving each other. An extremely satisfying read, this is DiCamillo at the top of her game. (4-7)

This fresh, inclusive anthology of historical fiction and fantasy showcases fifteen fully-realized short stories told through the diverse eyes of strong, adventurous American girls. Written by an equally strong sisterhood of female authors and steeped in some of America’s most memorable settings, readers will find the collection well-researched and empowering. (9-12)

The characters and plot elements of the fairytale of Pinocchio, the puppet who becomes a boy, are thrilling twisted in John Claude Bemis’s charming middle grade fantasy set in an inventive, steampunky Venetian Empire. (5-8) 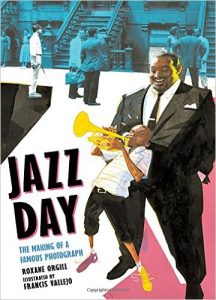 This collection of 21 new original free verse poems celebrates the landmark photograph of jazz greats, taken in Harlem for Esquire magazine in 1958. The artwork combines pastel and pencil sketches with acrylic paint, clearly depicting the historical time period as well as the facial features of the well-known participants. (4-8)

Marvelous mixed media illustrations put readers in the world of the unusual platypus. It’s a wonderful introduction to the platypus and his environment. These illustrations reveal an environment that photographs may not succeed in capturing. (K-3)