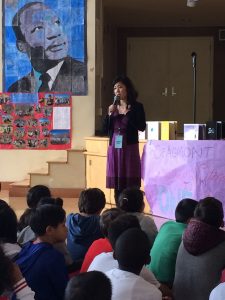 On April 11, 2018, Cragmont was honored to host award winning author and illustrator Kathryn Otoshi for two assemblies and an educator workshop.  The event reached 380 students plus 25 teachers and support staff.

When the Cragmont Literacy Team (made up of two classroom teachers, the literacy coach and the librarian) began to coordinate details for the One School One Book culminating author visit event, Ms. Otoshi explained that in addition to talking to students about themes of anti-bullying, community and kindness, she wanted to make sure she spoke with the grade levels appropriately and that she touch in with staff as well.  This meant that this author visit included two separate assemblies, one for kinder, first and second grades and another for third, fourth and fifth grades, a short tour of the art project her work had inspired, a luncheon and finally, an educator workshop.  It was a busy and exciting day right from the moment Ms. Otoshi arrived!

Since every class had heard four of Ms. Otoshi’s books during their weekly library time in the prior month (One, Zero, Two and Draw The Line), and had worked on a special art project inspired by One, students were more than familiar with Ms. Otoshi’s work.  Star stuck children walked by her car as she unloaded books. They waved and said hello shyly, then excitedly told whoever was nearby that “Ms. Otoshi is here!”

Ms. Otoshi immediately dove into her first assembly for kinder, first and second grades.  She conveyed her message of community in a very approachable way so that our youngest students followed along. She did an interactive reading of One that got students moving and reflecting.  After a very short break, Ms. Otoshi hosted the third, fourth and fifth grades.  It was lovely to watch how she used some of the same interactive techniques while also bringing in themes of anti-bullying and being an ally, topics that are particularly relevant for that older set.  Our literacy coach was especially impressed with by Ms. Otoshi’s willingness to share personal details about growing up as a person of color. Her presentation was powerful and provided a strong message to the students about inclusiveness and spreading kindness.

At each assembly, Ms. Otoshi took questions from students.  The librarian had made a question box in the weeks leading up to the event and we picked a handful of students to ask their questions at the microphone.  All the questions (around fifty total) were later display in the luncheon/workshop room and then given to Ms. Otoshi to take with her as a memory of how students had responded to her work.

Following the last assembly, we had planned a Q and A catered luncheon for Ms. Otoshi and teachers but Ms. Otoshi lost her voice and was concerned about the educator workshop afterschool.  We decided to host the lunch for the teachers while Ms. Otoshi went off campus to rest.

Afterschool, we had a two-hour staff professional development session where we worked on a collaborative art project that represents many of the big ideas in her books. She also spoke about the connection between art, literature and character education. We concluded the day with book purchasing and signing.

In the weeks following the visit, we started to make the art project a reality.  At the workshop, Ms. Otoshi helped staff create a large wire dragon (our mascot). During the last few library visits of the year, each class listened to similar stories of community and art (for instance Maybe Something Beautiful by F. Isabel Campoy and Theresa Howell).  We thought about how we can make our school community a welcoming and beautiful space and then the librarian brought out the huge wire dragon frame.  Inspired by Ms. Otoshi’s book Beautiful Hands, students traced one of their hands and wrote a kindness they plan to share with Cragmont community.  Hands of all sizes showed intentions such as “smile at someone new,” “pick up trash outside,” “teach a kindergartner to play four square.” The dragon and all of its beautiful scales is now being assembled by a fourth grade teacher for permanent display in the library starting next fall! I am happy to send another photo when it is done.

This event was such fun and was incredibly rewarding.  Students were so excited to have a “real” author on campus and several teachers ended up using pieces from Ms. Otoshi’s work in the classroom. Ms. Otoshi is definitely an author Cragmont students will remember fondly, her books never lasted on the shelf for more than an afternoon and students from every single grade excitedly read and reread them together.  One third grader even wanted to do her biography project on her the following month!

If we were to do this type of event in the future, the literacy team discussed perhaps having more creative ways for students to interact with an author’s work in order to create more investment and involvement.  For instance, having fifth graders do readers’ theater for kinder classes to give yet another anchor for when younger students hear big presentations.  There is no way we could have predicted that Ms. Otoshi would lose her voice so despite not being able to host the special luncheon, it was still a full and successful day.

We are very grateful that ACL helped make this special visit possible!  It was something students and teachers will remember and an event we can build upon in discussions of community and kindness for as long as Ms. Otoshi’s books are in in the library and our wire dragon hangs for all to see!