Zoos are always a popular storytime theme, and there are several new Zoo books that will fit well with the classics you already use such as Goodnight Gorilla by Peggy Rathman. For a craft project, make simple paperbag puppets of a zoo animal here. 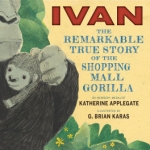 Applegate, Katherine.    This informational picture book describes the true story on which the novel The One and Only Ivan is based.

Burningham, John. THE WAY TO THE ZOO.    Sylvie has a secret door that goes from her bedroom to the zoo.

Caple, Kathy. A NIGHT AT THE ZOO.    A boy and his grandfather fall asleep at the zoo.

Faulconer, Maria. A MOM FOR UMANDE.    When a gorilla is born at the zoo, his mother doesn’t know how to pick him up, so the staff has to show her how.

Heder, Thyra. FRAIDYZOO.    Little T’s family makes zoo animals out of boxes and other recycled materials so she won’t be scared on her next visit. This will inspire a great craft activity with school-age children.

Hillenbrand, Will. DOWN BY THE STATION.    In this well-known song, baby animals ride the train to the zoo.

Lithgow, John. NEVER PLAY MUSIC RIGHT NEXT TO THE ZOO.    In this rhyming story with an accompanying CD, a boy is at a park concert near the zoo when he imagines the animals as the musicians.

Lobel, Arnold. A ZOO FOR MR. MUSTER.    Mr. Muster enjoys visiting the zoo so much he brings the animals back to his apartment.

Mandel, Peter. ZOO AH-CHOOOO.    Snow Leopard starts a chain of sneezes throughout the zoo, in a fun story with onomatopoeia.

Massie, Diane Redfield. THE BABY BEEBEE BIRD.    In this participation story, the crowd will chant the repeated phrase the baby bird makes, which keeps all the zoo animals awake.

Park, Linda Sue. XANDER’S PANDA PARTY.    Xander is not sure which zoo animals he should invite to his panda party.

Rathmann, Peggy. GOOD NIGHT, GORILLA.    A zookeeper and his wife put the animals to bed.

Rice, Eve. SAM WHO NEVER FORGETS.    Sam the zookeeper goes about feeding the animals, but has he forgotten the elephant?

Sadler, Marilyn. ALISTAIR’S ELEPHANT.    Alistair is followed home from the zoo by an elephant.

Sauer, Tammi. OH, NUTS!    Three chipmunks who live in the trees at the zoo want some attention, so they mimic the behavior of the caged animals.

Sierra, July. WILD ABOUT BOOKS.    A librarian sets up a library at the zoo! Told in the rhyming style of Dr. Seuss.